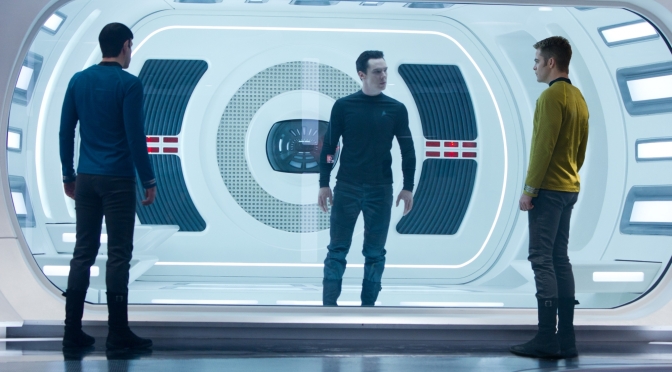 An already established universe behind it, Star Trek Into Darkness should have an easy run of worldbuilding exercises that can help further expand this J.J. Abrams science-fiction vision. No such luck. Meandering along without much to prove and even less to show for itself, Star Trek Into Darkness is an uncomfortably predictable piece with quite a strange change in pace and tone. Bumping out some of the more established characters and gambling on the introduction of Benedict Cumberbatch as a nostalgia-pop villain, surrounded by the fairly well-established new heroes adorned in roles of a bleak and whimsical past. There is room to grow into them for these characters, and thankfully, Star Trek Into Darkness does offer that in spotty moments of discourse.

Chris Pine and Zachary Quinto are exceptional as ever. The repertoire between them does not change all that much from the first, although the feature-like episodes of their adventures are well-meaning and changing their dynamic too much would affect not just the status quo but the fabric of what makes the Enterprise crew so endearing. Simon Pegg is omitted for much of the action, as is Bruce Greenwood and newcomer to the series Peter Weller, whose turn as Admiral Marcus does the decent, essential job of any veteran supporting performer. It is the twist that he is part of, spotted from a mile away, that loses surprisingly little when identified. Even then, Cumberbatch lingers over the top of it all with a perplexingly simple performance that gets little out of him.

But what little they get is meaningful for the rest of the characters, thankfully not wasted throughout this space-trekking voyage. Star Trek Into Darkness, like its predecessor, appreciates the time it has and rattles through a relatively simple back and forth storyline that relies on relatively smart occurrences in its early act. But Abrams cannot help himself and hopes to call back to the poignant moments of the original series, reliving and replicating the harsh and moving moments fans will likely want to preserve as something special. These scenes are not tarnished, but the callbacks are obvious even to the most regressed and passing of Star Trek fans. Question marks are looming over how effective such a scene can be when its outcome is not quite convincing enough to change either the character dynamic or the future of the series. To do so would be nothing short of madness.

As cuttingly simple as it is, Star Trek Into Darkness is a tense, well-shot blockbuster that is full of strong moments. It is a shame they never come together as one quality piece of entertainment, but the details presented, the love for the worldbuilding and the extremely great work of a supporting Karl Urban are on hand to steer Star Trek Into Darkness out of the abyss. A larger galaxy is attempted, boldly pushing Abrams to places he would never traverse again. He does not quite succeed in pairing established characters with broader worlds, primarily because his action scenes are less-than inspired and the growth of some of his characters is relatively minimal and even nonchalant. Not particularly great to see only two films into a series, but there is little to complain about, too.