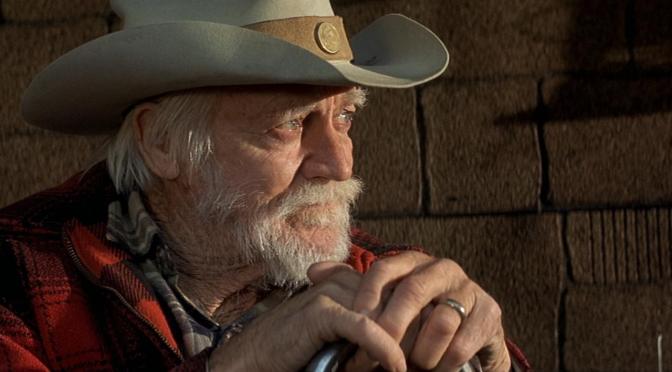 Alvin Straight is an inspiration to not just this film, but many people across the globe. I would imagine so, anyway. He is to me because he is an individual who carried out a relatively tame task, visiting his brother after hearing the news he had had a stroke. It is how, why and where Straight travels throughout The Straight Story, from director David Lynch, that is most interesting of all. His sole aim is there, and I’m sure many of us would have given up or found a conventional means of transporting oneself from A to B, but not Alvin Straight. His journey takes him hundreds of miles across the country on the back of his beat-up old lawnmower. It is the determination he presents, not the trip, that inspires most of all.

Played by Richard Farnsworth, it is relatively comfortable to watch Straight travel along the road, interacting with those he has to in the hopes of reuniting with brother Lyle (Harry Dean Stanton). His travel from Iowa to Wisconsin is directed with strangely endearing tones and a heart-warming sentiment running deep below the character interactions and core goal. There are no black and white horrors, no tricks of the camera, Lynch directs a project that wishes to focus on the riches of character and performance. He does so well enough and presents a film that does not feel like a Lynch project, but it does not feel like one of passion either.

There is no denying the strong work everyone puts in here, Farnsworth and Sissy Spacek in particular. Why Lynch has attached himself to a relatively humble project is a headscratcher, for he doesn’t linger on anything with much conviction or incredible interest. The Straight Story certainly has strong performances, but it is relatively placid and conventional. It is not like Lynch cannot blur his artistic talents with something marketable, he managed it with The Elephant Man and even Wild at Heart to a lesser extent. The Straight Story travels through its scenery with relatively comfortable tones, and perhaps that is the point. Why expand upon that when the intention is to showcase the lives of characters who come and go, but to some larger extent it is a musing on the ageing process, something which me and Lynch apparently share a fear of.

Straight turned down talk show interviews and media attention because that is not what he nor The Straight Story is about. His love for his older brother was the aim of his trip, and his lawnmower was the only means of transportation available to him. That much is captured in The Straight Story, a Lynch piece that does not have horrifying imagery or vivid terrors that one would first imagine. He does not display horrid creatures or ruminating terrors, but straight-shooting storylines that have their fear based on how old you are and what your thought process is. Should we fear the ageing process? Probably not, not at my age anyway. But I do, and it is The Straight Story that identifies and targets this terror.

Ageism is one thing, but when Straight quips “The worst part of being old is remembering when you was young”, you can feel the aftershock for quite some time. Many of the conversations found within are of or about the ageing process. Characters are shocked and surprised by this elderly gentleman travelling so far with such an odd means of transportation. Senility is the preferred explanation of the younger generation, who seemingly don’t understand the dedication to family Straight has. That, then, is why The Straight Story can get away with its conventional directions, because at least Lynch is cowering in fear along with his audience at the prospect of one day travelling down the road on a lawnmower. Rather than confusion, these people feel sympathy for Farnsworth’s character. But it is not sympathy he requires; all he desires is a repair of his lawnmower so he can be on his way.