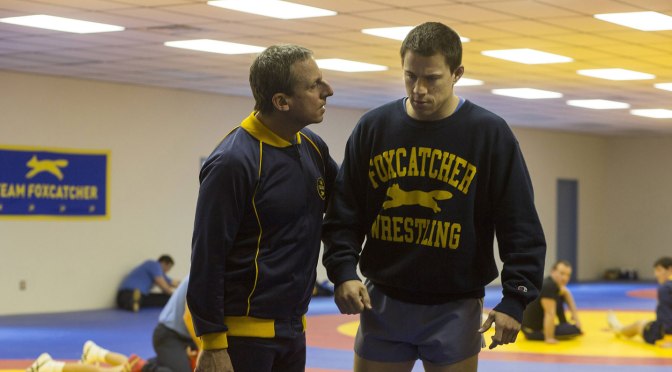 Champions are born, not raised. Probably. Foxcatcher highlights a role those physically gifted Gods are given in society. Wrestlers, rugby players, it’s all the same to those who have no aspirations for toned looks and terrible feats of physical strength. But there is dirt beneath the surface. For all its uniformity and desire for kinsmanship through teamwork, jealousy prevails. That is the core of Foxcatcher. That jealousy remains throughout and works its way into the outlook of professionals who, when tasked with facing up to their feelings, are not prepared. They are physically strong but mentally aghast, and that is the fine line drawn between these leading characters under director Bennett Miller.

Miller’s main, game-changing choice is to have Steve Carell wear a fake nose. It is such a slightly odd change to make, but one that morphs the performer into someone far more sinister and aggressive. That is not a role Carell should find comfortable, yet he slips into the regressive strokes and antagonistic glares with ease. He is at home with a lack of hospitality. John du Pont (Carell) is a striking figure, though, one whose main draw is from a performer who should be out of their depth. He takes to it well, though, throwing himself into the deep end and surviving it, through fear of typecasting and a strong desire to prove himself worthy of such roles. He certainly is, and his performance changes the system of which we can relate to characters in the biopic formula.

Foxcatcher breaks free, somewhat, from the conventional system biopics put audiences through. There is a static nature to its opening, an unconvincing pride of America is brought out by Mark Schultz (Channing Tatum) as he tries to brag about his Olympic gold medal to an audience of uncaring children. That is the American dream, the ability to show off to those who do not care. As his voice echoes through that hall, ever so briefly, there is an understanding that he is stuck in the shadow of his siblings. He leads a dull life because he cannot escape the versatility his brother offered in the same field as him.

While it does not grapple with the deeper reasons or meaning for the tragedy at the heart of this thrilling tale, Foxcatcher is a film that depends wholly on its performers. It is they who shoulder the burden of this calamity, but they never touch on what placed it there in the first place. Carell cannot touch upon the mental struggle of du Pont, but he can inflict the emotional conflict and aggressive nature of such a larger-than-life millionaire. Seeing the how is one aspect, but why is just as important. In fact, more so than the how, for it gives us reason and detail we simply need for Foxcatcher to really work. Thankfully strong performances guide it to pastures new, with the lavish lifestyle of du Pont clashing magnificently with that of the Schultz brothers. It is their desire for fortune and glory that strikes them down, and it doesn’t seem like they deserve the disaster they are handed.