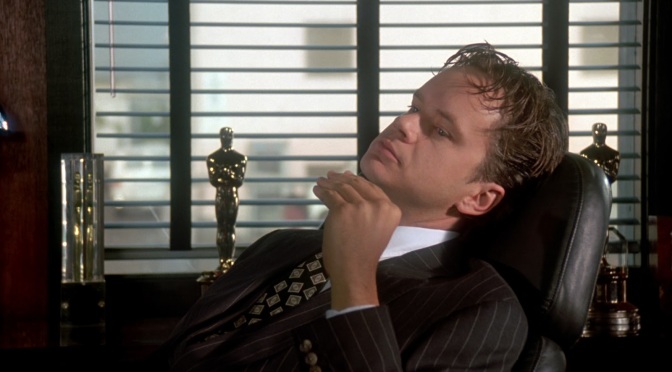 We live in the land of rejection, but much of The Player is focused on how we adapt to sore losers than an implicit desire to improve upon refusal. Its tale of a studio executive hounded by death threats from an anonymous writer is in pole position to criticise and chastise the Hollywood scenery. With Robert Altman helming a finely-tuned ensemble, it is hard to see where or why he could put a foot wrong when presenting Griffin Mill (Tim Robbins) to audiences. As its tracking shot makes the hectic life of a studio producer known, The Player introduces us to the lust, allures and obscenities of star-power, stardom and desire.

Much of that is encapsulated by and around Mill, whose snake-like, slicked-back appearance brings about the necessary, ass-kissing charm of a movie executive. He claps hands with John Cusack and Anjelica Huston, not because he is fans of their work, but sees an opportunity. Not that he has the time to connect with these individuals, for the darker story soon prevails, one of stalkers and anonymous threats. Is he worth threatening and harassing? His attitude stinks, and Robbins does well to provide that fine line between objectively heartless and convincingly worried. Mill is surely a piece of work, but we cannot help but feel for him as he worries about which writer wishes to have his head.

It is the turning cogs of the Hollywood machine that churn up writers and spit them out to the kerb that is to blame, not Mill. The Player soon turns into a man resolving to fix the mistakes of his past. They are not even his mistakes. Washed-up long shots that are angry they didn’t receive a phone call on whatever fan fiction or piece of fantastical insanity they handed in didn’t receive a call back. Mill hunts through his hefty backlog, and as he apologises to so many, it seems relatively genuine. Altman is good at that, providing a heart to the angry, senseless actions of a man who has wound up becoming a major cog in the machine. He is a player in every sense of the word. A character whose desire to make money sees the creatives he inevitably relied on fight back as they realise, he is a good-for-nothing. Robbins realises this too, and as the mystery unfurls

It is hard to sift through the anger of so many to find a specific culprit when so many have been wronged for the same reason. The Player will convince those that feel dubious over the style Altman presents. It is a film for film lovers. Martin Scorsese, Harry Belafonte, Gary Busey and Julia Roberts are among the various name-drops, nods and cameo roles shoved into the crammed Hollywood lot. It is the sick plight of the Hollywood star, to have it all and then refuse it to those that are trying to rise through the ranks. Robbins and Altman work brilliantly together, putting together a scathing piece of film that laments the happy endings and heartthrobs, yet feels compelled, comfortable and convinced that it needs them itself. It is a bitingly good piece of dark satire, yet at its core, The Player is dependant and devoted to its Hollywood desire. It is the dream we should always chase, but fear in equal measure.