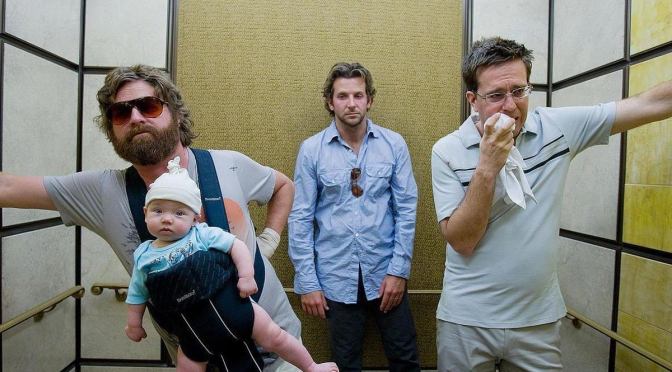 Unreal circumstances and erratic, forgotten behaviours of the night before make up much of The Hangover, a film which, decades from now, will be used as evidence that Americans cannot handle their liquor. Passionless craftsmanship with ensemble casts was the root problem of the modern American comedy, and the efforts of Todd Phillips highlight that horridly here. It is the lowest ebb, yet somehow extremely popular and well-regarded. Whatever convinced audiences and critics alike with The Hangover is a rare, lightning in a bottle moment that seems to get over well with casual moviegoers. Gatekeeping that may be, there is a serious lack of quality, depth or detail found within The Hangover, that, when looking at beyond the vaguely entertaining style it takes, is rather obvious.

Based upon the premise of one-note characters retracing their drunken steps, The Hangover bases itself entirely on the idea of comic mishaps that occur through intoxication. It is far-fetched, and considering how grounded and apparently real the rest of the film is, it is Phillips who presents real disappointment here. Be bold enough to embroil these devastatingly dull characters in conflict and strife, rather than the muted, expectedly opaque issues they stumble through here. It would be rather easy to overlook this seemingly banal point if the comedy had been engaging or, crucially, funny, but that is the key issue with The Hangover, it simply hasn’t got the courage to tap into the lighter laughs.

Zach Galifianakis and Bradley Cooper lead the charge for what few nuggets of gold can be found within. Ed Helms is present also. Stupidity does not equal hilarity, a message unfortunately lost on Phillips and crew, who bash their way through celebrity cameos, dysfunctional mishaps and inevitable plot constrictions that lead us safely to the end of the film. Phillips has been vocal with his criticisms of the genre and how difficult it is to make good comedy anymore, but that implies he made any himself. Are there moments in The Hangover that are, at the very least, somewhat funny? Yes, begrudgingly I would admit there are a solid two moments of worth. They are fleeting, fast, and their presence in the narrative is minimal at best.

But that is the best comedy can be, fast and fleeting. It must be both, as neither will work alone. Shamefully, The Hangover does both separately. Fast jabs and quick-cut dialogue are mused on for all too long, holding out hope that no audience member has been left behind. Short-lived moments are prevalent, but these are the scenes that need the extensions or expansions, not for the comedy, but for the sake of this see-through story. The Hangover is a poor attempt at comedy, neither capturing the quality nor quantity needed to tackle the whip-smart efforts found elsewhere.