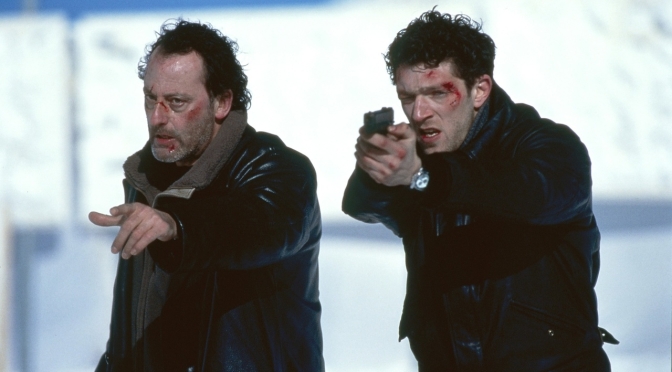 When a cast and crew this strong come together, there is a responsibility inherently linked to the potential, expected quality. A crossover of clues brings two detectives together, and if that weren’t happenstance enough, the later twists and crawling insects at the start will be enough to churn the stomach. Not through fear, but anxiety. Concern for where Mathieu Kassovitz is willing to take his cast, and just how much of it Jean Reno and Vincent Cassel feel comfortable in displaying. There is undeserved brutality to The Crimson Rivers, one whose insects and deep red blood of a decaying body elicit brief tones of The Silence of the Lambs’ less-interesting depictions of cold-blooded killers.

If that were not enough for budding fans of Reno and Cassel, their pairing is a surprising dud. Two greats of the industry. Titans of French cinema and creatives with daring films in their repertoire are reduced to cold and expectedly calculating detectives. Kassovitz’s direction feels more in-tune with an episode of NCIS than it does a brooding thriller that wishes to link cases of foul play together. Nothing sets The Crimson Rivers out as anything particularly unique for the time. Reno saunters around a crime scene, cigarette limply hanging from his mouth. All French detectives must smoke. It is the law laid down by just about any auteur in French cinema, but it would appear his clumsiness in lighting the cigarette at his disposal contrasts with a cocky attitude in the face of unwanted tension.

Reno is good at displaying that, but it never amounts to anything more than brief flutters of interesting character study. Where its performers are strong, the story they find themselves following is lacking in both believability and brevity. Kassovitz’s little notes throughout are the leading issue. His musical touches and his eye for direction are overbearing and relegate the story far, far below where it should be. Good actors can elevate a simple story like this, but Reno and Cassel have their work cut out for them. They cannot elevate the happenstance murder with the desecration of a grave, and the lengths at which the crew go to in linking them together make for relatively tame, if odd conclusions for both of these criminal cases.

But all the while, something is bubbling underneath the surface. By far the most frustrating aspect of The Crimson Rivers is how there is a plot worth our while unravelling, just far away from the focus of Kassovitz’s eye. Independent of one another, Reno and Cassel offer interesting performances, but together they get off on the wrong foot and never recover their balance. For all the darker, brooding thrills found within this crime flick, very few of them will leave any lasting impression. Its true horrors are in the shock value of the corpses and gruelling, graphic nature of it. Kassovitz must know this as he zooms in on the severed hands and gets uncomfortably close to the faces of these corpses. Unfortunately, he nor his cast can translate uncomfortable to unconventional. The Crimson Rivers soon falls into a knowable, unfortunate rhythm of predictable shots, weighed down heavily by the lack of chemistry between two talented leads.