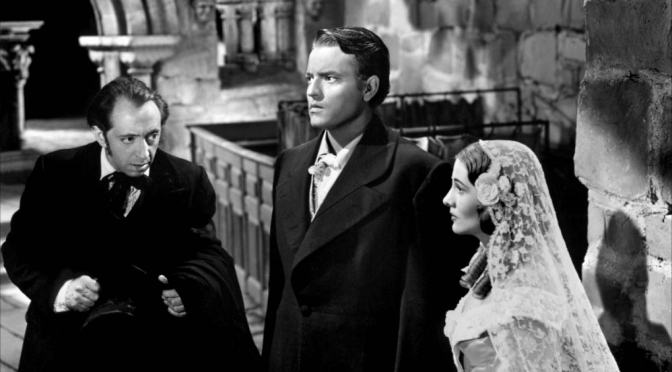 Notes of Charlotte Brontë and her prose are far stronger in this 1940s edition of Jane Eyre than its modern, Mia Wasikowska-leading counterpart, but director Robert Stevenson does not necessarily make that a positive. “A harsh time of change in England,” must be presented, as that is what the opening crawl of text offers us. Joan Fontaine portrays the titular character in an expectedly great performance that offers further ruminations on the meaning of one of Brontë’s best-known works. But the few notes of interest that this adaptation shares with the book and the future work found in 2011’s Jane Eyre is of no particular change, not in what is brought to life on the big screen, anyway.

What does change is the style and merit of these characters. They are instilled as caricatures of what they represent in the book, that much stays the same. What does change though is a responsibility to be closer to the period. Cary Joji Fukunaga takes liberties with how his camera can be positioned, and that is the delightful curse of modernity. His efforts in the 21st century feel grander than Stevenson’s, but then again, Stevenson has a generally unique flair for these moments and the motives of the characters he brings to life. They feel, generally, much nicer. We are not thrown into the depths of torment and horror so soon in Jane Eyre, although our first encounter finds her locked in a cupboard. Peggy Ann Garner holds her own as the younger embodiment of Jane Eyre.

But it is well enough to see these efforts, especially with Henry Daniell as Henry Brocklehurst, but the technical choices made in telling an audience this narrative ebb away. He consistently refers back to pictures of the text, and while this sets the scene, surely the flow of a connected narrative would be far more credible for those moments. A shame, too, for Stevenson has a keen technical eye, with Eyre stood on a stool in the middle of an empty room, making friends despite her seemingly rebellious nature. These moments are the standout for Garner and eventually Fontaine, but everything around them, even Orson Welles’ appearance as Edward Rochester, leave much to be desired. Welles especially, who here embodies the love interest not out of interest, but out of duty to his other projects which needed funding. He is not particularly interesting here, but his credibility as an actor is rarely in question.

There are never moments within Jane Eyre that understand why these characters are cruel to Eyre, but the cruelty itself is interesting and tense. That blur of reasoning and action is the key, though, and Stevenson cannot bring that to this Brontë adaptation. Eyre is a dreamer, someone who wishes for great opportunities in the fields and cities beyond her. Stevenson may have an adept cast at his disposal, but his utilisation of such is underwhelming, not because of their performances, but because of where they find themselves. Stubborn and cruel adults who are not here to “conform to nature,” as Brocklehurst says, are brought to life with definitive villainy, but the point of it all is never connected to the intentions and future of this eponymous character.