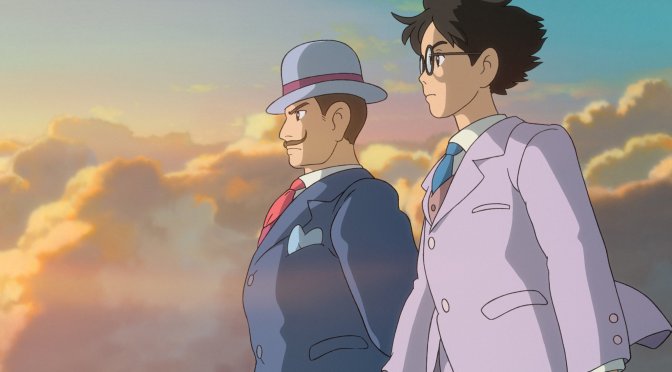 Staggering adventures through the air are certainly the desire of Hayao Miyazaki with The Wind Rises. His passion for aviation and the heroes behind it is admirable. He plans out his final bow, and for a good few years, The Wind Rises was the final offering of a masterful animator. A man who had steered a genre to its peak, and offered some of the finest features available to audiences of so many generations. That impact is felt throughout this feature, one that looks to adapt the life of Jiro Horikoshi not with fact, but with appreciation. It is here that Miyazaki can deliberate on what he feels makes an effective human being, and he does so with such a natural desire to express his respect for the Japanese engineer through dream sequences and a fictitious personal life that fuels the fire of his passion.

Absolutely wonderful, and the sky-high desires of The Wind Rises show flickers of the superior perfection of Porco Rosso. Its imitative flattery is not an active choice, but when you make a film about a pig flying through the skies, it is rather difficult to move audiences away from that on subsequent trips into the air. “The wind is rising! We must try to live.” is the Paul Valery quote to open The Wind Rises. Miyazaki sets the tone of this feature well with that quote, enabling us as an audience to feel his love for animation, the freedom of the world around him, and an inspiring tale that sets about depicting the life of Horikoshi.

Not a well-known name in the western world, but a certainly innovative and important one. One who has left his mark on the life of Miyazaki. He adapts Horikoshi’s life with the usual Ghibli magic, and this added flair for light periods of fantasy brings colour and flair, unlike anything other studios could offer. Truly unique, and a thoroughly rewarding feature to engage with, not just for its elements of biographical notes but its splendour and world-building. Its opening dream presents the fears and desires of Horikoshi with a succinct quality and an immediately understandable narrative. There are the inevitable notes of family and the relationship between an ambitious brother and an annoying, comical sister. The former studies, the latter questions. Miyazaki uses this to open a dialogue for the audience, and it works rather nicely.

But these details are fictitious. Horikoshi never had a younger sister. Miyazaki crafts these moments as narrative filler, so he can spend more time with the daydreaming brilliance offered by Horikoshi. He could never be a pilot, “I’m too close-sighted,” he says. Is that any excuse? Probably. But these are dreams, and Miyazaki makes these characters wrap themselves in the comfort of dreams and the magic they offer. The Kingdom of Dreams and Magic is quite an excellent documentary on the process Miyazaki takes here. His hard work and toil pays off in the end, though, and had he hung his hat on The Wind Rises, then few would complain of this strong offering looking to depict an unsung hero of Japan with no care for fact, only a desire to make a bustling life visually unique.