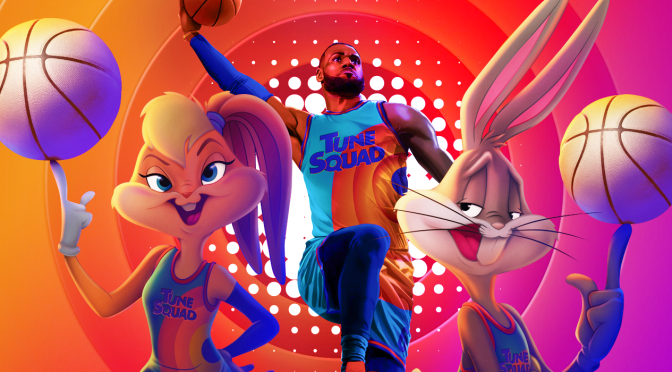 This is it. The commercialisation of nostalgia, from a generation whose nostalgia lies in the likes of Looney Tunes: Back in Action and Robots. Joe Dante already spoke of the issues surrounding the former, where executives wished not for depth, but displays of popular characters from a variety of IPs, cohabiting with one another. Space Jam: A New Legacy is just that, a cameo collect-a-thon for those who find fun in witnessing characters from different franchises appearing in their beloved, space-oriented basketball films. That is not depth, nor is it fun. Where Space Jam had a comic appeal to it through its all-star cast and its animated versatility, its faithfulness to the Looney Tunes style, the inevitable adaptation to the modern-day from Malcolm D. Lee is a frustratingly inept one.

Nostalgia is fickle. To base an entire film upon it is a terrifying process. Parallels are immediately and inevitably drawn between the old and new. A Gameboy is replaced by a PSP. Well, not old and new then, very old and old are compared. But that is Space Jam: A New Legacy in a nutshell. Old ideas replacing ancient ones. Flummoxed basketball nonsense makes itself prevalent through the scenery-chewing acting LeBron James offers. He is out of his depth, here, and we are lucky he can back this performance up with basketball skills. Even then, those few professional actors that have been roped into this feature fare no better. Don Cheadle appears as the only recognisable living character, and he is soon lost to the overbearing, sleek CGI.

When so much of the feature is dependent on the animated stylings, it is an uncomfortable shame to see how poor they really are. We are never given a reason to care for these sleek and understated server-based conceptions. Heading into the “Serververse” we are given our first glimpse of Cheadle. He is Al. G Rhythm. A light pop at how algorithms are shaping projects. Not so much a joke but a warning from Warner Bros. there. He is trapped inside the “-verse” worlds these days, and his brief flutter away from the Marvel Cinematic Universe sees him deposited into a server where he is surrounded by muted tones and colourful creations that merely give the impression of creativity. His odd little sidekick is as generic as they come, looking like a mascot for computer virus protection than a thoughtful, interesting design. Bugs and his buddies fare no better either, the scenes that surround the climactic court showdown are clustered with people and places we may know and love, but we love them for the depth and stories, not just because we have seen them crop up somewhere.

Oversaturated colours are commonplace, yet profoundly bland in what they wish to show. Space Jam: A New Legacy has all the makings of a disastrous piece led not by the star power of its basketball protagonist, but by a desire to tap into the nostalgia pops of its previous generation. Space Jam worked not because Michael Jordan loved Bugs Bunny, but because he was helped by them. Why we are shown a kid in gym class playing an awful Bugs Bunny game is unremarkable, yet is all the character depth we are given to the boy. It is not enough to throw familiar faces into a film with no story, just look at Ready Player One. Lee’s feature cannot bring any depth to the Where’s Waldo? selection of scenery-filling characters. Nobody can, though, that is the inherent issue to Space Jam: A New Legacy.