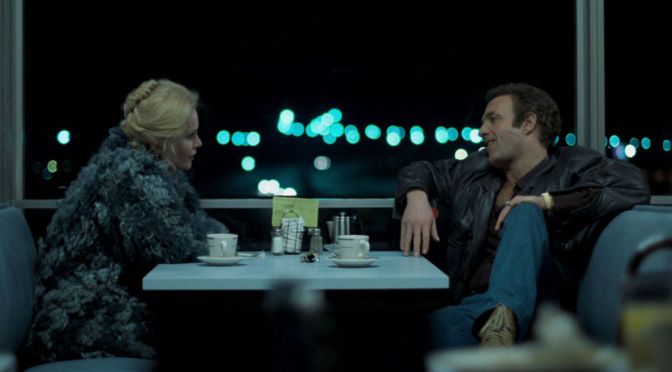 Sharp suits and sleazy actions mark Thief as a film set on displaying a cold heart in leading man Frank (James Caan). Michael Mann directs his way through the streets with a stunning vibrance and exceptional colour scheme. It is all about layering an experience together. Bad men and tough decisions go hand in hand. Mann understands that, Caan does too. As Frank wavers his gun around the place and threatens those that owe him money, we are given a stylish look at a safecracker trying to escape the criminal cycle. He has seen the light. It is hard to avert your gaze from it, considering how translucent and stunning Thief can be.

Well-lit sets provide a sleek soundstage for Frank and his issues. He is close to being a rich man indeed, he just has to convince those around him that he is up to the task. We are not often shown what it is he needs to do. Even when we are given a glimpse into Frank’s real world and the illegal safe cracking business, it does not have any real threat. It is safe, and Mann doesn’t seem prepared to ramp up the tension. Those that Frank converses with, the long-suffering girlfriend, Jessie (Tuesday Weld) is one of many characters that don’t understand what Frank wants to do with himself. Conversation after conversation of where love should be, where trust should lie, and why we should not ruin the lives of strangers.

Thief suffers infrequently because of this evaluation of being and style. Its slower pacing allows for the story to push through, but Mann displays little conviction when necessary to do so. There is a real disconnect between the stylish choices and the emotional rehabilitation of its leading man. Caan gives a great performance, reciting dialogue verbatim and offering up the usual talents he holds as a leading man. But it is not enough, there is little flare to it. What he offers is the masculinity that drives Mann’s features, but without the guilt or tact that comes out when these characters are given the chance to explore what they desire. Heat displays two men that are flawed but justified in their way of life, whereas Thief has the flawed lifestyle, but not the explanation as to why, or the core story strengths to explain how it is possible.

Yet Mann remains unrivalled. His exploitation of shady deeds inopportune circumstances elicits a core, valuable element of entertainment, blurred with characters that bleed a delightfully devilish and humourless past. That is the issue at hand, though. They are detached from the real world. Mann would often make these roles in his later work slot into reality, but here, they are isolated from any concept of realism. It is a sacrifice that paves the way for fine detail and interesting camerawork, but it is a remarkable change of pace from the man who made Manhunter work by basing the characters on the world around them, not the other way round, as Thief tries to do.