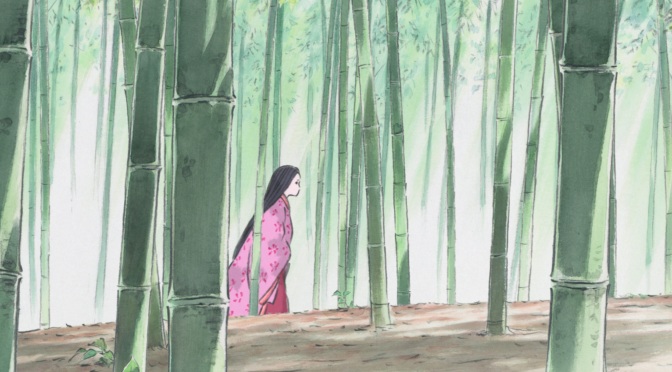 Animation is inherently emotional, and its style is guided by the needs of the creative. Studio Ghibli has offered countless classics, and the key that links them all together is their distinct style. There are now two films from Ghibli that I can think of that have broken that rule. The first is Earwig and the Witch, a foray into the modern world, of which they should never return again. The other is The Tale of the Princess Kaguya, a piece that strips back the polished attires of Spirited Away and Porco Rosso, presenting a piece that feels inherently workmanlike. Isao Takahata has brushed shoulders with Ghibli several times, and his final piece for the studio sees the marks of the draft making their way into the film.

It is easier, then, to pick apart the layers of what The Tale of the Princess Kaguya has to offer. You can see the layers within, those arduous hours spent perfecting the scene. Scorch marks of an initial idea, erupting into a finely-tuned and beautifully visual piece. It harks back to a style Ghibli had intentionally disassociated itself from around the time this style was popular. That removal of wholly accepted style worked wonders for their films, The Tale of Princess Kaguya merely confirms that they could animate stories to look like The Snowman or Where the Wind Blows. I do not find that style particularly endearing, especially not for Ghibli, whose forthright ability to design and construct marvellous new worlds through their own stylings is, by far, the biggest strength they had. It works for The Tale of the Princess Kaguya, though, more as a break from their norm than an endearing nod to the works that they wish to take inspiration from.

But they fashion a narrative for themselves and deliberate on the meanings of the legendary story. It is colourful and emphatic. Those moments of tension, where the wild boar roars across the open terrain, are exciting but never lose sight of the calming tones Takahata is capable of conjuring. The Tale of the Princess Kaguya is filled with life and energy. Here is a director who understands the Ghibli standard, but wishes to change the animation, whilst reclaiming what it means to craft an emotionally compelling story. These are characters who lead initially simple lives, and we are all the calmer for it. As they nap in the comfort of their homes with the rain pouring outside, or the children run in the fields, there is an overwhelmingly nice sense of tranquillity and peace.

Where these quiet musings take us is up to Takahata, although I do not feel they take us far enough. They are lovely to experience and oddly calming too, but they deliver a story that leaves much to be desired. Porco Rosso can deliberate on a wholly grand scale of emotions, from comedic interludes to fantasy elements and bouts of serious drama, underlined with incredulous wordplay. The Tale of the Princess Kaguya is unable to do so, but what it can offer, it offers as best it can. Fantasy and disbelief are utilised so beautifully by Ghibli films. So well, in fact, that they can be passed off as relatively normal components of the world. A pig flying a plane taking down pirates is normalised because of how the characters react, and that, to me, is my preferred way of intaking fantasy elements. When you adapt a tale as old as this, there is a respect for the source material that must be met, but respect and conformity are two different entities. To some degree, it is the unique ideas of Ghibli that are better served in narrative than that of adaptations of literature.

What beauty can come from legends of old, The Tale of the Princess Kaguya is a magical experience. Its break away from the tested stylings of Ghibli is a breath of fresh air the studio failed to capitalise on. Takahata, though, has a vision in mind and adapts it beautifully. But it is the lack of definition I find most endearing about the tales that these studios offer. Porco Rosso may make use of a period of history, but it is nowhere close to realism, nor does it want to be. It is its own image, as are Ponyo and Spirited Away. The Tale of the Princess Kaguya is not. It has a duty to adapt the tale correctly, and that it does, with wondrous results, but the animation style is what separates it from the rest. It is the best of the adaptations offered by Ghibli, and possibly their best of the 21st century, but there is not a note here that is better than their original ethic of the 20th century. Great ideas, unique creativity, and a definitively engrossing style that could enchant and effect whilst being based on nothing in particular.