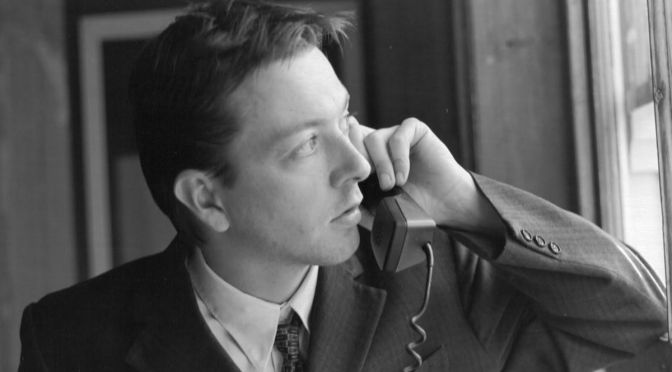 People watching is an odd fascination that many have. You are more likely to do it than I, for I don’t get out much these days. Shadowing or following anyone and everyone is certainly frowned upon, or at least it should be, but Following, the debut of Christopher Nolan, has no intention of demonstrating that moral question mark. There is the obvious sense that a man should not do this for he will eventually find himself in over his head or in the back of a police van. The former happens to The Young Man (Jeremy Theobald), who takes an odd pride in his people-watching antics, as he forms his interests in how others interact and behave.

Much of that is odd and boring, though. People do not live fascinating lives, but this Young Man is interested in such endeavours for no reason other than his own procrastination. He is a writer, or would be if he could sit at his desk typing more than one key every few seconds. He questions the lives of those around him, and for no particular reason. He wants answers to questions he should not ask, not just because an answer is impossible, but also because it is not interesting. “Never follow the same person twice”, so he is nice enough to make his stalking a part-time gig, as opposed to a full-time obsession. Still, as a narrative, Nolan leaves much to be desired, a common characteristic that would plague his films for years to come.

What does manage to come through is that style and natural tact for direction. Following is a good-looking film, one that utilises the black and white cinematography to add that fashionable thriller layer. Here, the only issue to overcome then is where his characters go and why. Cobb (Alex Haw) is strong as a performance but relatively bland as a character. Following suffers from poor writing quite often, and despite the technical aspects that certainly warrant merit at such an early period in Nolan’s career, it doesn’t matter if what we are watching is not of interest.

When you go to a cafe for a coffee and the server replies with “come on, it’s lunch”, then I’m not sure what level of reality we’re meant to be operating on. Are we in a world where coffee cannot be ordered without lightly toasted bread and dairy fillings? Is there even any point in mentioning that? No, but Following does, and therein lies one of the overarching problems. Nolan is a man of detail, and when he has a story that he’d like to sink his teeth into, he has plenty to offer and links to the past and future. His foreshadowing is superb at times, but in Following, something is lacking and missing. He is expecting us to follow Following despite its lack of direction. How can we follow a story with no interest or leap? Expect the unexpected, seems to be the message here. Following, ironically, does not heed this advice, and its repentant lack of charm is unexpected. But we should’ve expected that, shouldn’t we?