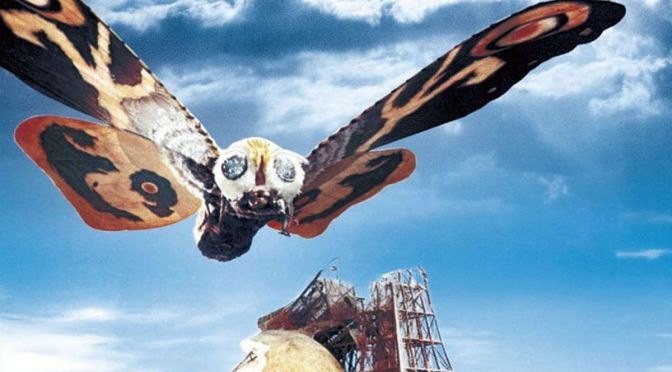 While the Kaiju-clad screen may have spawned with a stark warning to the effects of the atomic era, the social commentary would live and die within Godzilla. Beyond that, a marketable monster was found, and has left his scaly print on culture and a slew of mediums that stretch far beyond the big screen. Credit where it is truly due, for it is a thoroughly interesting and engaging character, the depth was just never tapped into as well as the debut, although there are plenty of stories to surround him. An infant of the radiation that spawned the King of Monsters, Mothra showcases a spin-off of filled with all the tropes and tribulations of these Toshi terrors.

Noteworthy the success of this kaiju may be, I’ve always believed that the spin-offs and characters surrounding the classic titan are only as successful as the direction of Godzilla. Mothra has proven me wrong, a film that shares only a similar name for these giant beasts that plague the world. After a somewhat strange kidnapping of fairies, Mothra awakes and seeks out the inhabitants of her island. Shipwrecks and happenstance encounters with these mighty beasts seem rather common, and it does work with what Mothra wishes to showcase. Alone and in a state of tranquillity on some far-off island, it is again civilization disturbing the peace, and dealing with the consequences.

Building itself up exceptionally slowly, Mothra eventually tells the story of this giant, radiated moth. While its character design and monster magic are certainly worthy of praise, there are a questionable collection of scenes found throughout. We spend little time with Mothra in full flight, their presence on the screen not felt until nearly an hour has passed. Fine if the characters beyond the monster are interesting, but the study of a journalist and a couple of forgettable faces swanning around looking for trouble doesn’t have that appeal that Godzilla did. Those that encounter this oversized moth, frankly, had it coming to them, whereas the families in Honda’s first kaiju movie are bystanders to a problem they had no control over. It’s hard to connect with characters that don’t present a theme or have some defining set of traits. As a standalone film, though, and to not compare it with Godzilla for a moment, Mothra certainly does have some engaging moments under its belt.

With such achingly dull human characters eating away at the first act, Mothra does struggle to take flight until much later into its running time. All is not lost, but by then it does feel like the damage has been done. Some bits of destruction make it worth it in the end, but there are times where Ishirō Honda’s craft verges on mediocrity. A good monster makes it worthwhile, though, it is hard to argue that Mothra is not a considerable foe or staple for the franchise. As a standalone film though, it is a rather forgettable one. Plodding along, the weight of the considerably short running time really starting to weigh down the stark few moments of incredible, monster-infused energy.