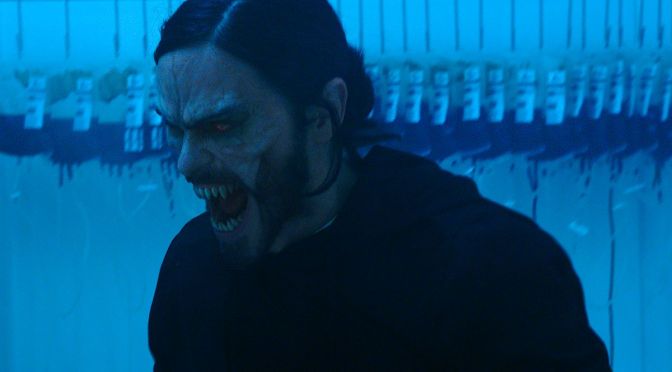 It is easy to be washed up in the tidal wave of cultural relevance Morbius has created for itself. Looking into why that is, however, it should be clear that the survival and financial success of this Jared Leto feature are both thanks to its inability to fail because of a sincerely devoid and devoted fanbase and because of its self-flagellation as an act of apology for not being very good. It is a maddening cultural cycle, a funny one, but one that does very little for the progression of a genre tiring itself and its audiences out. Morbius is a fascinating shift in motion for the superhero branch, a rallying cry for those that will fail and fail again, to never quit because someone on Twitter will turn a blind eye to imperfection. It is Morbin’ Time after all.

Memes and banal social media hashtags are the response to a feature lacking in quality. If that is what Morbius lives or dies on, then so be it, because it will have served a better and more honest purpose than it had first set out for. Although it has been immediately repurposed, Morbius does have some genuine strengths to it. Leto observes a role that is as surreal as it is stupid, and plays it as such. A director actively trying to derail any effort for what little quality can remain is supported by Matt Smith, but Leto doesn’t take this nonsensical direction lying down. He and Adria Arjona are on top form, but considering the lows of their career thus far, it is the equivalent of using cutlery at the table instead of scooping soup with bare hands. We should not applaud basic manners, we should not applaud Leto for surviving Morbius by the skin of his teeth.

Still, Morbius is the best Leto role of the year. Not a high bar since this is his only project of the year. Be swept up in the meme culture Morbius has made or be drowned out by those rallying for a second feature they can laugh at. Either way, everyone wins. The Mighty Morbin team get to plaster Leto on some more posters, the fans get to mock more freezeframes and Marvel gets to snag themselves another hundred or two million for their bonfire. Engage with the new way of harnessing culture or be berated by it. Funnily enough, though, Leto isn’t too bad. Jared Harris is a remarkably solid supporting cast member and if it weren’t for the awful direction and editing on display from Daniel Espinosa, then Morbius would be completely placid. It’s just another cog in the giant Marvel wheel, but now with a meta social media presence that mocks and berates itself.

That system is lighting in a bottle. Marvel has missed the point of those clamouring for a sequel. What started as a ribbing has devolved into a genuine act. Leto will return for Morbius 2. Do audiences actually want that? Or are they just ribbing an entire franchise powerhouse? It is surely the latter. Morbius does not experiment with the appeal of so-bad-it’s-good entertainment, it is just bad. Espinosa, a director whose works have relied on ripping on popular sub-genre functions twenty years after they were relevant has done it again. Instead of tearing through Alien with his poorly devised Life, he has now turned to the defunct vampiric genre, last enjoyed by Keanu Reeves’ dullard tones in Dracula. Who knows what will happen with Morbius 2, but what is certain is that this social media pull and the hilarity surrounding it is a one-time event. Enjoy it. Thrive on it. It’ll not come around again. Marvel has failed to acknowledge the difference between being laughed at and an audience laughing with them. Marketing or not, it is the former, and that does not equate to success for a second instalment.