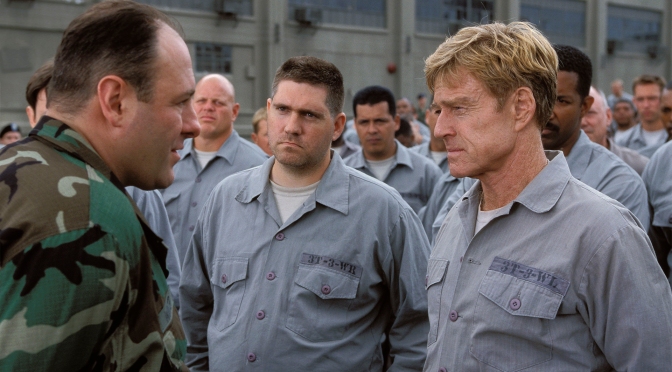 Patriotic parables of real American heroes overthrowing enemies of knowable origin was a particularly hot topic for the phase of post-9/11 moviegoing. Heroes that earned their stars and stripes, military propaganda, it is something that struck up a dependable line for the action genre to take. The Last Castle, then, is an odd failure of such a marketable strategy. A box office bomb and now a later stage entry of cultural amnesia, The Last Castle’s dependable ensemble are now up for grabs as an unsung feature of the early 21st century. Rightly so, somewhat. Rod Lurie would peak and fall with this middling feature that provides all the right highs and lows of an action feature, but its determination to capture the hearts and minds that were so deeply affected at the time is a grand failure.

Disgraced generals and an island prison provide a decent backdrop to the back and forth between Robert Redford and the late James Gandolfini, whose career is tough to look at considering just how much promise is there. His role as the antagonist and military prison leader Colonel Winter is astonishingly good. He outshines the heavy-hitting names of Redford and the up-and-coming Mark Ruffalo with exceptional skill. Managing to overcome the stigma his role in The Sopranos could offer his movie projects sometimes (look no further than Nicky Deuce for an ironic butchering of that), Gandolfini finds himself a surprisingly emotional core. The man without a mission trying to hold a prison together while at the same time failing to prove his authoritative ambitions.

Redford’s role as the somewhat disgraced and court marshalled Lieutenant General Eugene Irwin is never quite stated truthfully or well. He is a catalyst and advocate for the American heroism so synonymous with an America spinning on its heel and turning towards old heroes. Redford embodies that not just for being a general whose reasons for being in prison are never established with much confidence, but because of who he embodied in the highs of his career. Butch Cassidy and the Sundance Kid and The Sting highlighted him as a charming face of the big screen, but The Last Castle’s reliance on that is too much to handle. Great feats of strength and wisdom come from the man behind bars not because the writing can muster it up but because the set pieces are damned if they don’t present him as a sharp mind stuck in prison.

At least the barrage of hellfire and explosive action at the end makes up for a rather lacklustre build-up. Gandolfini and Ruffalo share a few great moments together yet it is Redford letting the side down. It is not his performance but what it represents. As he lugs one pile of rocks to another part of a field and back again, the indelible quality of the American spirit is not so much lifted but misunderstood. The Last Castle does not provide rich ideas or interesting subtext to its characters, a shame since the story on its surface is a usual back and forth between authoritative figures and the respect that comes with doing the right thing. It is how Lurie tries to tie that broad idea solely to the American way that pushes his feature a little too far.