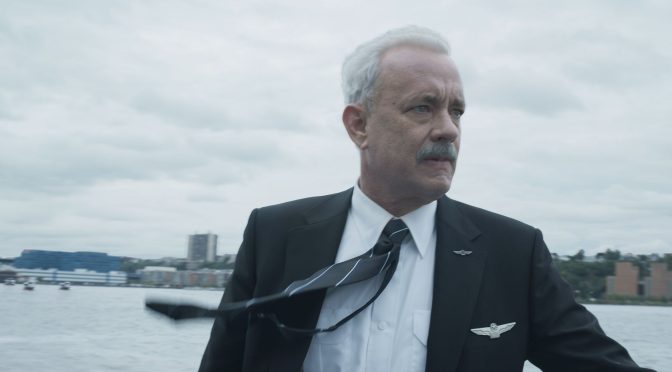 Washed in fear and produced by a stroke of genius in a pressure-fuelled time, the heroic actions of pilot Chelsey Sullenberger are just the right story for a biopic. An act of genuine selflessness and confidence knocked down ever so briefly as a disgraceful and dangerous act, soon redeemed by a legal body. Sullenberger saved hundreds of lives, that much should always be remembered. Clint Eastwood immortalises these actions in Sully but inflicts the idea that it is his American patriotism that gave him the gall to take such a risk. Maybe so, but as an outsider looking in, it is a tough pill to swallow and a tougher one to agree with when it is explained so abruptly.

Tom Hanks is, expectedly, a fantastic draw. His embodiment of Sullenberger is an immediately touching one that grapples with the fear of flying that this pilot has. It is the crashing and burning that he fears most of all. Haunted by nightmares despite his act of heroism and the kind words that flow through to him so frequently. He has not just the right look and the benefit of strong direction, but that relaxed and quivering voice brings such excellence to the role. Hanks is a natural, and while Sully is not his most memorable performance, it is not without its merits. Whatever role he is handed, Hanks will do well with. Solid work is what we should expect from this acclaimed actor. He, like the rest of the cast in this film, do not need prodding or provoking from Eastwood, who has crafted a piece that accidentally muses on far greater a point than could ever be anticipated.

Eastwood accidentally enlists some rather potent memories of Flight, the Denzel Washington drama, but that is more because of the similarities of leading characters than anything else. An obvious difference here is that Sullenberger was not a drinker behind the wheel, nor was he a fictional character. Loose inspiration may bring the tragedy of Alaska Airlines Flight 261 to life, but that was not the occasion Washington rose to at the time. Hanks exceeds this piece with that uncontrollable desire to not shine his own starry quality, but elevate those around him. Aaron Eckhart turns in a valuable supporting performance. His selectivity with projects is odd considering how few are actually any good, but Sully is a break of pace for Eckhart and offers him some nice variety.

The only miracle here is that Eastwood has salvaged a semi-decent narrative out of a very brief flicker of American heroism. But is it an American styling of selflessness and patriotism to save the lives of passengers on your flight? Far stronger the second time around, a fully developed brain will appreciate this more than that of an uppity child, or at least that’s what happened for me. Eastwood’s pragmatism and ode to the ordinary heroes of America are still as unconvincing as it is in other projects, but at least here he has a narrative complexity and strong performances to rely on. He is not just throwing everything at the wall, but the turnaround to that is Sully feeling like his least ambitious project to date. It is safe and competent, just what we needed to tell Sullenberger’s story.