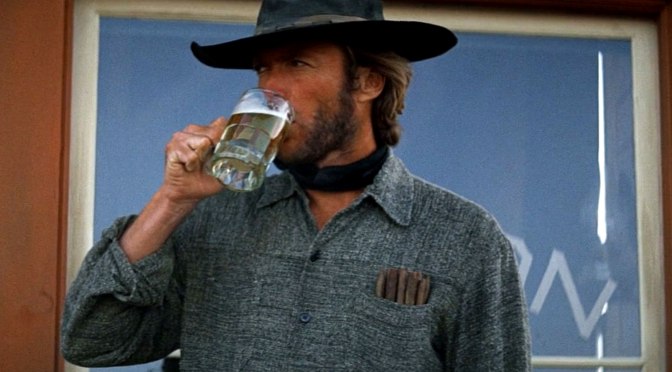 A first of many for Clint Eastwood, High Plains Drifter marks his venture into directing westerns. His work in the genre in front of the camera is synonymous with great shootouts and memorable bits of spaghetti western legend. Behind it, he is best remembered for his work on Unforgiven, the swan song western piece that gave a brief farewell to the genre. He would utilise the style and meaning of the nameless hero time and time again with later efforts like The Mule, but High Plains Drifter feels like the most on the nose of all his western efforts. That is certainly not a bad choice. Soon, the western would fall out of favour with audiences. Eastwood marks a responsible blend of Hollywood amiabilities and spaghetti depth, enough to make his anti-hero verge on the side of villainy, and for no good reason.

Part of that comes from his dependency on old tropes. His character, merely known as The Stranger (an inevitable nod to the success of his Man With No Name trilogy), is the usual anti-hero of the genre. Clad in black leather and riding a dirty horse into Lago, Eastwood’s characteristics here are brooding and still just like that of For a Few Dollars More, but he is a tad more talkative. His words are still cutting, but Eastwood is keen to focus on the action of his character. Movement causes fear. Even the barber is frightened of him. Still, he has money on his mind even with a quivering hand and stammering voice. It is not as though The Stranger has said or done anything to frighten him at this point. Inevitably the gunfire and shock, paired with a loud soundtrack and some excellent camera framing, make for a tremendously stunning scene. Eastwood clearly sees himself as a hero in this role, with the camera often looking up to The Stranger. Are we meant to look up to the mystery of the man or the man himself, though? Either will do.

But even if we are to look up to this character, those who encounter him certainly don’t. “You’d be amusing if you weren’t so pathetic,” and the villainous trash is cemented with the horrible actions that follow. High Plains Drifter has a fair handful of uncomfortable scenes. But within these scenes and the reactions of the townsfolk a realisation that Eastwood is representing the evil notes of the western as not just a genre but as a period of time. There is no recompense for that or anything else Eastwood’s character does. He rides into town, ends lives or ruins them. Naturally, he soon turns out to be the hero a few individuals need. Right place, right timing, nothing more than that. High Plains Drifter is careful to cement The Stranger as a begrudging participant in the just actions of a few good souls, rather than someone actively seeking the right choices.

Yet it is the brutality and intensity of displaying such actions that make this Eastwood piece uncomfortably memorable. Whippings, bloody shootouts and an intensity that fires through an audience with an incredible, cutting style. A collection of worthless beasts, that is what High Plains Drifter offers. Complete sadism from all corners of this colourful cast of characters. Eastwood does not shy away from the depravity of the times, and to his credit, makes something of it. His intentions are clear, even if he wishes to make himself the hero. He does not balance it well enough to make that happen, but High Plains Drifter still works with Eastwood as an interesting anti-hero. The Man with No Name rides once more, but has a darker soul than usual.