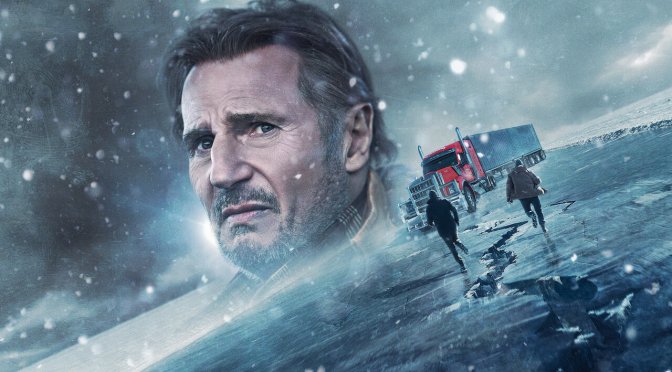 Winter wonderlands are the recent love of Liam Neeson. Had Cold Pursuit satiated his desire to star in colder climates, then there is doubt looming over the mere existence of The Ice Road. Taking the action legend (who promised he’d retire from said genre several times over the past five years) to another vehicle-bound thrill ride, the latest feature from director Jonathan Hensleigh is mired by a desire to cause tightly-driven chaos where its setting provides the random terror of adaptation. Drivers traverse man-made roads over frozen rivers, the opening crawl tells us, and with that, there is danger abound. But it is how this danger is presented and its troubling disconnect, which makes for such an insufferably tedious affair.

A heroic sacrifice from a supporting performer here, a betrayal there, and The Ice Road has all it needs to cause drama and tension between its one-note characters who happen to find themselves in a disaster zone. It takes some time to get to such an ensemble of destruction, but Henseligh recognises his audience is not here for effective character studies. Audiences enter into The Ice Road to see Neeson hit people, hurt the bad guys and hunt down some vacuous goal of non-descript importance. That is precisely what The Ice Road offers. But as Neeson bumbles his way through cheap scenes and choppy ideas, we are never given the chance to observe him in his natural role as a leading man with a plan and a husky voice. He feels absent and removed, even in the scenes he takes precedence in, but at least

What is troubling, though, is how low-quality The Ice Road feels. Its CGI snow is noticeable, its editing style choppy and overlapping. Simple effects such as fades into new shots and the positioning and movement of the camera strike troubling moments. Hensleigh is jittery, wishing to expose us to many angles, rather than effective ones. These editing slumps are wounding, and look even worse when explosive action takes centre stage. A cheapness flows through as these vaguely recognisable faces look concerned and chastise the poor decisions of one another. Early scenes see a man throw an axe at a pipe, subsequently blowing his colleagues up and out through a pipe. With little time to understand this, we cut swiftly to Neeson, driving along in a red truck with no reaction or response to the dreadful events that just unfurled. We should be thankful we do not have to linger on such shoddy CGI for long.

Usually, Neeson can elevate the plodding action setpieces to new heights. He has a charm and longevity that has seen him turn in dependable popcorn flicks well into the sixth decade of his life. He has yet to call time on his role as the action hero, for he still has a youthful energy about him. It is not he that is slow and sluggish, but the projects he chooses and what they entail are bland. Sorcerer set to the backdrop of icy tropes and icier individuals manning the 65,000-tonne trucks. 18-wheeler car chases are not as exciting as one would think. Perhaps it is because they have a maximum speed of around sixty miles per hour. We are to believe they drive far faster than this, and it is the brief allure of leaving reality that knocks The Ice Road out of any sensible sense of respect. That, and the fact that its leading man and the crew that surrounds him have no idea what to do with their ice-cold setting.