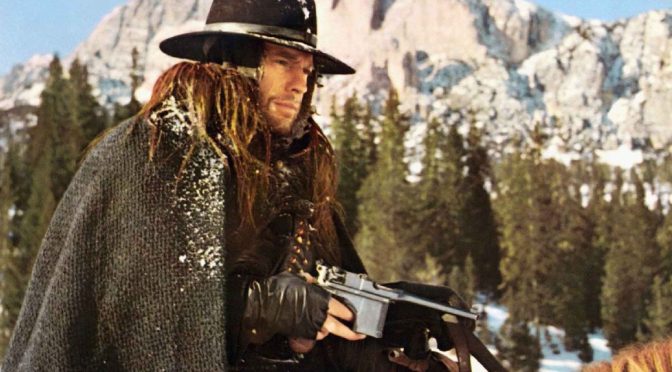 At the heart of the spaghetti western was Sergio Corbucci. With his work on Django, he innovated and struggled on to represent the titular character as someone of gritty self-integrity. It would become a staple of his style elsewhere in the genre. Between that and The Specialists, there was a great understanding of how bad people could shine through with the occasional good deed. For his work on The Great Silence, he expressed many of the same sentiments that had steered him so well before it. He had flirted with bleak and unremitting consequences and backdrops before, but has a clear shot throughout this Jean-Louis Trintignant piece.

He adapts it well. There is a brooding realisation found within Trintignant’s performance as the man known only as Silence. He is, indeed, the Great Silence we should be in awe of. He is the unlikely lawmaker, protecting one set of bandits from a harsher group out for blood. One evil is lesser than the other, which seems to be the point of this tale. Silence is a product of the harsh realities of the dark corners of the primitive civilisation we call the Old West. His revenge is started and finished in the first act. He is given the depth of a leading man in the short space of a half-hour, which frees Trintignant up to go off in search of pastures new. This would only work with such depth to the character, and with some underwhelming writing at times. Good dialogue should slip off of the tongue, but here it feels muddled and confused. Still, there is a good understanding on display from the cast, who troop on through the less-than-stellar dialogue.

There are pockets of immensely well-grounded knowledge. The backstory to Silence is simple and effective, his method of killing rich in detail. Corbucci takes pleasure in building up the world around Silence, so much so that he almost forgets to give the same level of detail to the rugged bandits that surround him. Loco (Klaus Kinski) is a horrid villain, and Kinski’s experience of the genre serves him well here. He knows the spots he needs to work on, the emotive moments that set him and Silence apart, and they are all captured well.

Unflinching and pained, The Great Silence gives the western genre a thoroughly dark presentation. As if it were not a bleak enough genre. Harsh, violent, and lingering. It is the crucial trilogy that Corbucci would rely on so often. Here, he presents a piece that is far from faultless, but as stories with depth and meaning go, his is one of the finest. There is a reason for the killings and conniving characters. He gives them an aim beyond greed and gold. That is more than enough to separate this piece from a great bunch of the west, although Corbucci fails to realise, as he does in many of his features, that the finest westerns relied on shootouts, not scripts. He is lacking in both the former and the latter, and the two together are the true downfall of The Great Silence.