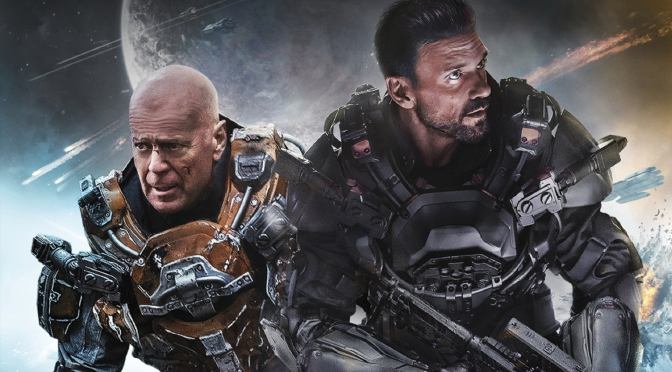 Movie-goers may be somewhat aware of the dip in quality Bruce Willis is working through at present. His appearances in Precious Cargo, Hard Kill, and now Cosmic Sin, are components of a wider problem. It is not “what” he is appearing in these barebones action flicks for, but “why” he is doing so. Consider their measly box-office takings in recent years, financial responsibility cannot be the driving force for his appearances. Willis has followed the route of Steven Seagal or Jackie Chan, banking on the name value of their heyday (in the case of Willis, Die Hard), and using the name-value to clamber aboard project after project, all sharing the same action tropes that the straight-to-DVD market are gracious for.

What, then, are these films for? Most low-budget action flicks can establish a world and setting, somewhere these characters convene. At the very least, a background is presented. With Cosmic Sin, the blurring of general sci-fi tropes sits uneasily. To some extent, though, the action scenes are somewhat engaging. They begin and end with no real meaning, stifled by the masculinity bleeding from every character surrounding the bar. Willis is not so much “in” the action as he is “next” to it, hauling men over counters and pulling the odd grimace. He plays the tired old warhorse that has yet to be put to pasture, as he always does. It is the antithesis of the action star, and therein lies the problem. His removal and subsequent inability to engage with the excitement of the film is troubling but shows Willis is not yet ready to part with a genre that long outgrew him. He clings to the weight his name can bring to this genre because it is still, to him, his turf.

One criticism Willis can swat away with Cosmic Sin is the problem of his screen presence. He is fitted into the first billing, but often appears less than the background extras. His lines have neither improved nor evolved from the two or three sparks of muttered grit that oozes from his mouth. But, and this is an issue director Edward Drake takes into account, the weary, puppy-dog eyes are not as threatening as the chiselled jaw and quick-witted Willis of a time long past. Throughout Cosmic Sin, he looks like a deflated airbag. He would be better suited as a hireable Neil Tenant-lookalike, although his lack of dialogue may harm his appearance as one half of the Pet Shop Boys. He at least mingles with other cast members but is notably absent from any scenes of real impact.

Drake attempts to capture the tensions of his piece with extreme close-ups, the eyes of unnamed characters bulging from their sockets as they are gripped by a fear that only they can feel. Subsequent moments of poorly lit, sea blue scenes follow. Every scene suffers from this drowning sensation, lens flares linger on the MacGuffin device sought after so feverishly by just about anyone trapped in a spacesuit. Filibuster and dismal first encounters with alien lifeforms, there is a sense of artificial flavouring to Cosmic Sin that can be found in Willis’ earlier efforts. Cosmic Sin does not stand out above the rest. The first encounter Willis has with any dialogue sums his career, and Cosmic Sin, up best. “Once upon a time, you were a big, bad motherfucker, but now…”. Now, indeed. What now?