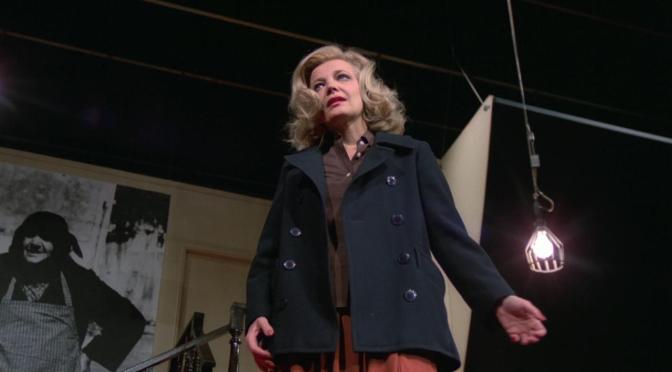 Spinning the addictions and low points of life into consequence-heavy and even enlightening moments of character study is indeed the forte of director John Cassavettes. He displayed a broken family within A Woman Under the Influence, and in Opening Night presents somewhat similar themes of isolation and abandonment, but instilled in a woman that has a purpose and a career. There is something about the grounded realism that makes Opening Night, and, by extension, the work of Cassavetes, so horrifying. It is brutal in its routine. Larger-than-life characters are met with moments and decisions that will affect both the individual and those around them. Their decisions are often self-centred and fixated on bolstering themselves as the next big thing, and it is such inclination that causes the horrible, spiralling breakdowns Cassavetes handles here.

It is the desire of Myrtle Gordon (Gena Rowlands) to be loved. She is, after all, in the profession of performance. What other reason is there to perform than to be loved? That much is shown rather frequently both on and off the stage. Rowlands captures a worrying blur between on-stage persona and the real world. She is a functional alcoholic, a pained expression permanently etched on her face as she downs bottle after bottle of liquor. The lavish horrors of the celebrity lifestyle appear to be more than enough to warrant such coping mechanisms, and Cassavetes does not shy away from showing this. It is that loss of reality, and the spiral begins much faster than anticipated in Opening Night.

Soon after the problems of substance are available, they are cast aside by Cassavetes’ writing. They are red herrings for the real problems underlining the relationship Gordon has between stage and reality. They bleed into one another, and Rowlands’ performance provides a masterful control of both the camera and direction. Her agony is placed well, shown with terror and tremendous energy. We are in the audience, watching from the rows a few back from the stage. Cassavetes presents this intimate nature by staging the world as realistically as he can. By planting us in the audience, rather than the stage, we can be assimilated into the environment, for we are seeing this breakdown through the eyes of others, rather than a disconnected entity that wriggles into the intimate moments Gordon has.

Raw passion and beauty come from those artists who wish to use their real life as an influence for their performance on screen. Cassavetes is no different, and his meditations within Opening Night find a man wracked with anxiety and guilt for his acclaim or lack thereof at the time. The real tragedy of Opening Night is its lack of warm reception, until its syndication after the death of Cassavetes. A sad shame, especially considering this appears to be his most intimate adaptation of life in the industry, with all the highs and lows that come from working so closely with the same cohort of actors and specialists. There is something in that which is truly heart-warming, and equally heart-breaking. Opening Night grasps at the anxieties any creative feels when they put work out there. A leading character who is not ready for the big plunges of life. It seems Cassavetes is just as terrified. Gordon puts it best though; these works are made to reach the people who don’t believe anyone understands them.