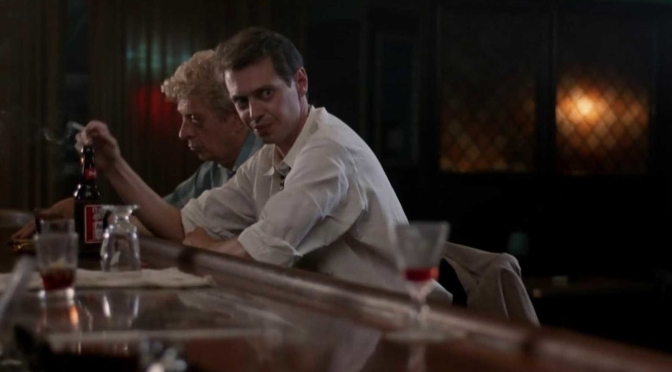 Where do the losers and lost souls convene? Bars, apparently. They do so in Barfly, and Trees Lounge too. The likely story for these losers is that they are unhappy. Even films that do not centre themselves on sipping life away one swig at a time are finding themselves coupled with the dispassionate meaningless so many people cling to. Shaun of the Dead envisioned this well, with the slacker lifestyle crushing any hope of escapism or dream of life beyond the pint. Trees Lounge does this too. It shows pubs not as places of joy or place of social watering hole, but of a void that swallows up the down-on-their-luck and the misfits.

“What’s your name again?” Tommy (Buscemi) enquires in the opening scene. Mike drifts away immediately after, despite the two sharing the drink and, probably, the same problems. They are lonely beasts, sat shaking as they reminisce about what got them into this horrid, turgid state. These supporting characters are exceptional, and their mind is a deep pool of woe to delve into. It is Tommy who creates most of the problems. He is sleaze incarnate. A scumbag in every sense of the word and with no quality that presents him as a redeemable human being. Buscemi plays it well, but it is hard to connect with such a character. There is only so far you can use the excuse of alcoholism as the reason for such failure, and Buscemi never implores us to look beyond his fallibilities and engage with his shortcomings.

There is a fine line between expressing the grief hidden behind a thick wall of liquor, and not. Buscemi opts for the latter, plain and simple. There are set pieces here where Tommy takes advantage of the women around the bar but does so in predictable ways that are easy to establish and easier still to understand where and why it is going to be a dud. The beer glass trick is the defining example of this, where Tommy attempts to take advantage of the scene and woman he is with. It doesn’t matter anyway, third party involvement should see him on the losing end, yet he is somehow irresistible to women. It doesn’t add up, but it makes sense to Buscemi, who stars and directs his way through a troubled character lacking in morals but making up for it in living a freewheeling lifestyle.

By that point, it is too late to throw grief into the mixture. The glass is already full, and to add anything more to this would dilute what little Buscemi has to offer. There is a tendency to make undesirable debutants desirable because we should not look down on them. In the case of Tommy, we should, do, and have no reason not to. Buscemi’s direction is the standard simplicity that comes with such a fixation on message, one that never really gets off the ground. He is keen to drive on through with no shock to the system or change of pace. We should conform to the likeability of Tommy because he is played by a likeable actor. No such luck, and not even appearances from Seymour Cassel or Samuel L. Jackson will change that.