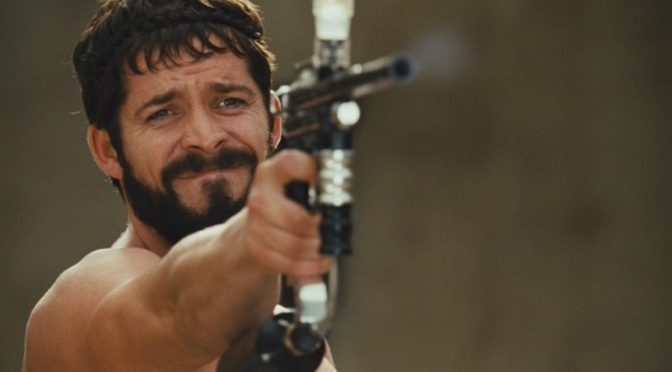 When parody was at the peak of American comedy, it was a sad inevitability that irredeemably toxic films like Meet the Spartans would slither out. On the same train of thought adopted by lazy producers in Date Movie and Disaster Movie, the surprise success of Meet the Spartans is perhaps no real eye-opener after all. Look at where we were collectively as a society a decade ago, and look at us now. A clear sign of decline, and I’d have to say it was Meet the Spartans that pushed us down this slippery slope. Parody and pop culture references are not the thinking man’s comedy. But even the sleaziest, worst works of the barrel-scraping has-beens did not dip so low as to infect and insult paying customers.

It should be no surprise that this cultural time capsule is dated and tragic. Alluding to the sexuality of the cast of 300 more than a handful of times almost immediately, there is no point even attempting to analyse or pick apart the various plot holes this offers up. Not just because the writing is non-existent, but because it is the lowest rung of quality. Perhaps the greatest issue of all is the dated use of pop culture references. Any film that tries to touch upon the Britney Spears breakdown and singers of an irrelevant era for culture are bound to be doomed to failure. Every other “direction” the plot takes is sewn together with a urine gag or swear word, without any real relation to who appears or why. They are completely devoid of reason; the lengthy gags are a strange by-product of either slim budgeting requirements or

Within two minutes there are puke jokes, a James Bond reference paired with a penis gag, a Brad Pitt and Angelina Jolie pop culture tabloid pop and some Subway product placement. Therein lies the problem with Meet the Spartans. This is not comedy; this is barely parody. This is pop culture paired with sex jokes and broadly useless variants of puke and fart riffs. Directors Jason Friedberg and Aaron Seltzer blatantly exploit men, women, animals and movies for their own financial gain. These actors are not cast on their abilities, but on their indefinable sex appeal and lack of care for the quality of their lines.

Oscar Wilde once wrote that “sarcasm is the lowest form of wit”, but he did not live long enough to watch Meet the Spartans. It is crass, unflinching in the face of any form of critical thought or comment. These actors are not people, for people would feel shame and embarrassment for their inclusion in such a project. As these drones circle the same few pop culture references, overused and stifled jokes, and what would parody be without a giggling fat supporting character, Meet the Spartans is a careless horrid rendition of what we as audience members once had to deal with. Spartans skipping to the songs of Gloria Gaynor immediately followed by product placements for Gatorade and Krispy Kreme doughnuts. What more could be wanted from comedy? A lot, obviously.