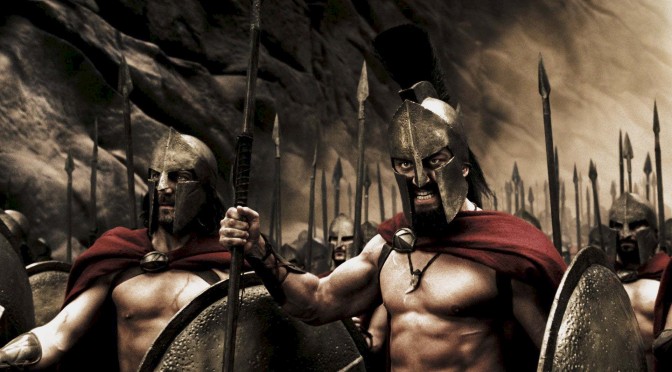 While the “This is Sparta!” scene is now synonymous with weak YouTube fodder and crusty, pixelated meme culture, it is an oddly solid scene. Odd, in the sense that, up until this point, I have yet to see anything good from director Zack Snyder. 300 seems like the type of film he should always be making. I mean that as a compliment, to some degree anyway. That is what Snyder does. He makes good scenes. He has concepts for moments that will elicit joy and excitement from an entertaining set-piece. On paper, this is the easiest and ultimate route to success, but it hardly ever works in his favour.

Snyder does not quite sink his teeth into classic history or legendary battles, but he provides a serviceable vehicle for action star Gerard Butler. It would be incredibly rude to ask for anything more from Snyder when regarding writing and story. There is no sense of pacing to these events. One moment we are watching King Leonidas kicking men into bottomless pits, the next he is scaling mountains looking for wizened scholars to give their blessings to him. If this is Snyder commenting on tradition and history, then he should make sure it is at least accurate and compelling. Slow-motion is found in every other scene, whether it is a fight scene or a flashback. Without it, 300 would barely clock in at feature-length.

This is a film made for fourteen-year-olds or the middle-aged, with no in-between. Odd camera angles used to give us a broader scope of an action scene, and the occasional break for scenery-chewing dialogue. It is up to the action scenes to pick up the slack. They do not. Sloppily edited and cutting so often, with a camera so shaky, it is difficult to figure out what is going on. Not that you’d want too anyway. Again, that slow-motion crutch is used, and it is the action here as Butler stabs and slashes his way that reminds me of a flash game called Achilles. You would move from one screen to the other, your only aim to kill whoever is thrown in front of you. That is, to some extent, as far as 300 gets.

It does have scenes of appeal, though. As I mentioned, he is a man of action pieces and parables, he just has no control over any of it. The rain of arrows is cool, but the one moment where the emotion, cries of battle and death would fit, it is strangely absent. Butler fights an ogre, but the palette is so dark and washed out that it is hard to care for his fight against the generic, snarling monster. All held together with narration from David Wenham, 300 does not have a story worth paying attention to, nor does it have action that will inspire any interest. It is slow-motion or conventional and boring set pieces, and there is no in-between.

His technical merits are awkward and strange, the forced, darker tones stand out as ever. He seems to overestimate his grasp of meaning, here is a dry story of a warrior surviving the stacked card forced against him. It is the hero’s tale that lures the audience in, and Butler is engaging enough to make it work, but there is little point to it elsewhere. It is the non-diegetic singers, the slow-motion shots and the wind whipping its way through the dirt and dust of the floor. Snyder craft at its finest, and his finest efforts never manage to aim higher than sheer mediocrity. Everything here is noticeably sound-staged. The best projects can at least contest a sense of illusion, but there is no such luck for 300. It looks like shoddy, amateurish work at the best of times, but that is the Snyder style.