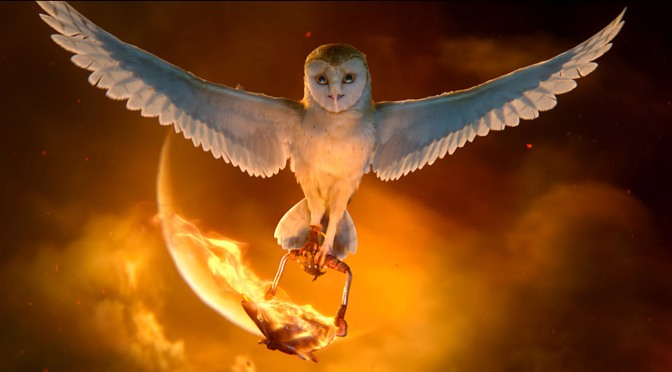 Birds have evaded me for much of my life. To my recollection, I have never seen a living chicken. I have met a penguin and had a seagull maul me for some chips. But chickens and owls, those common beasts, have never crossed my path. In my expedition to understand these great, winged myths, Legend of the Guardians: The Owls of Ga’Hoole will serve a noble purpose. Not as bold a move as the men and women who thought a feature film about winged creatures would work. Cinema had the chance to learn its lesson with Valiant, but evidently, its warning fell upon deaf ears.

A strange change of pace for director Zack Snyder sees strong animation and interesting landscapes. It shows the villains in the grey, hidden caverns and the heroes in the trees of the forest. Animation goes a long way for stories with poor writing, and Legend of the Guardians: The Owls of Ga’Hoole will do enough to entertain the younger audience it is so desperately flogging merchandise to. While its themes are certainly of the adult and historical variety, it will most likely soar over the heads of most intended audience members. Most of it will, either because it is too dark or because the character design, while good, is similar and lacking in variety. It is hard to distinguish owls, but as long as the colour scheme shows the typical good and bad, then that is more than enough.

Design aside, Legends of the Guardians: The Owls of Ga’Hoole is similar to that of restaurant menu photos. The deal is appetising and looks divine, but presentation can be deceiving. Great animation hides a relatively dull story of Nazi owls, voiced sparsely by Helen Mirren and Hugo Weaving. Most of the cast are relatively decent also, it is a fine film with forgettable lines and a vague story. Much of the budget appears to have been funnelled into the inevitable slow-motion shots Snyder loves so much. Still, at least he can keep the camera focused on the action, rather than cutting between it as he would a mere three years later with Man of Steel. With animation so colourful and sleek, it is no surprise that the fight scenes and final battles are entertaining, but their effect is weakened by these forgettable characters. If I were pressed for the name of any, I would truly, truly struggle. Their relationships are comfortable and safe, though, which is a fine enough replacement for recognisable, distinctive characters.

Legend of the Guardians: The Owls of Ga’Hoole is the closest Snyder has reached regarding quality. Over a decade later, and it’s time for a second run, is it not? A Snyder Cut of this is what the people want. Its pacing is non-existent, its opening barely memorable and its final third a fine amalgamation of forgotten remnants piecing together a palatable finale. Quite brutal for a film made for children, but the best of Disney was just the same. Legend of the Guardians: The Owls of Ga’Hoole has terrific animation, but it is a sad façade for an empty story of brotherly battles and warring birds.