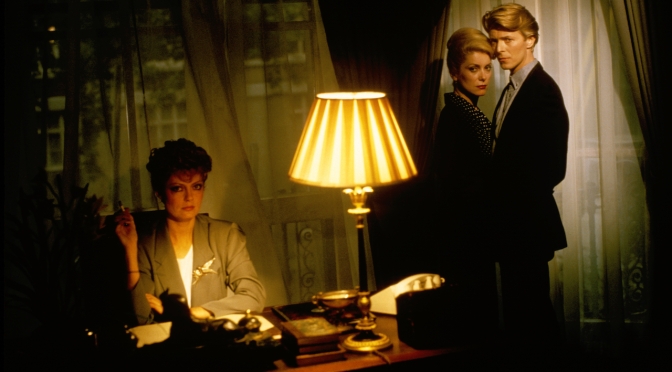 To appear so striking and so confident upon the debut of your craft is to have a respect for the screen and a co-ordination like no other. Tony Scott presents all in The Hunger, his freshman experience that sees two vampires grapple with the sudden mortality that afflicts John (David Bowie) who was promised eternal life alongside Miriam (Catherine Deneuve). As confident as these opening shots are, there is no escaping the seedy, early-80s misery inspired in pop music videos. These shadowy figures are explored by the shadows that hide them, the darkened rooms and pale cinematography a great denotation to the usual obscurity an engulfing of shadows would provide.

Some of the editing choices made throughout The Hunger are personally unrewarding but from a narrative perspective, it is hard to disagree with their effect. “Undead” a singer screams down the lens of the camera, each time the words leave his lips we cut to Bowie and Deneuve. It is an easy way of saying these characters are the ghoulish stalkers of the night we will be following, but also makes an effective use of soundtrack with a Bauhaus track, Bela Lugosi is Dead. If it were not obvious enough, these characters are vampires. Their lust, desire and weakness are picked apart, and suddenly faced with mortality, John loses his strength but forgets all about it. He wades into traffic, narrowly dodging taxis as if he were the same spry and youthful vampire he was a mere two hours ago. Bowie displays great conviction as the fast-ageing being, a reverse case of Benjamin Button, all bottled up and pushed into one character.

Speaking of character, there is little to unpack, but much to be said. Bowie presents the dying vampire; he does not know what he will do. His sudden plunge into a rapid ageing process is sickening to Miriam. She cannot bear to look at him, yet mourns his battle. As John screams on, repeatedly echoing “look at me, Miriam”, it is the skittery walk up the flight of stairs that sells the scene. Her inability to touch, feel or kiss the man she has spent decades with is a striking portrayal of grief before the man has even died. She is fearful that she is next, the next not to die, but to lose her beauty. These grander moments are few and far between, but when they do appear, they are well worth engaging with. Susan Sarandon also appears as Sarah Roberts, the doctor with the research and potential cure needed to salvage John. The two share the scene effectively, with a first encounter that skates around the edges of John’s anguish and Roberts’ muted excitement.

Scott is frequent in this utilisation of technical effects to display his story. Monkeys savagely ripping into one another, the blood shooting from their exposed skin is cut between the predator and prey, vampire and unlucky soul. The Hunger is immersed in its gothic costumes, the all-black silks and sunglasses almost permanently glued to the heads of these characters, it is stylish and fitting, but much like the characters adorned in this clothing, there is nothing more to them. Yes, it is morbid and creepy, Scott commands these dark tones effectively enough to hook an audience but has little else to say. Once you have experienced the sanitised hallways or viewed his unique editing and use of lighting and mirrors, you have seen all The Hunger has to offer.