Where would art be without innovation? If F.W. Murnau and the other pioneers of the early years of cinema had not persevered through the restraints of film’s infancy, then audiences would never get to see a Wesley Snipes fight scene timed to funk beats. How far art has come. Demolition Man is the strange new era of future crime-fighting and the marriage of action genre films and horribly planned-out time travel scorch marks. It will relay and channel the same tones and mood of the science-fiction genre that founded further Sylvester Stallone features like Judge Dredd. Telling that his career would rely on these themes and turns from time to time. They can be seen as early as Cobra. They probably peaked there too.

END_OF_DOCUMENT_TOKEN_TO_BE_REPLACED

As grand an idea as this final Alan Smithee feature focuses on, burning down Hollywood is not a possibility. The logistics are a nightmare for such a project, as it was for this Eric Idle-led feature. A film about a director trying to take his name off of a bad film, directed by a man who took his name off of a bad film. The irony is not lost on this all-star cast of cameos. Arthur Hiller may have removed his name from the “Directed by” credits found within, but he will stand the test of time on the Wikipedia page, a place that dedicates three lines to the entire plot, and does a better job of describing it than Hiller’s work manages here.

END_OF_DOCUMENT_TOKEN_TO_BE_REPLACED

After studying him so thoroughly and with awe during his time as the eponymous second president, John Adams, it is surprising, somewhat, to see Paul Giamatti crop up here in Ratchet & Clank. How bold he must feel believing in this project. We cannot blame him alone though, for he is the best part of this Kevin Munroe and Jericca Cleland-directed piece. He is the best part of many projects, but it is a shame that he is so prevalent here, for Ratchet & Clank is a dire scenario that pits its protagonists against enemies and evils that feel fundamentally broken, fitting into the humour, which is put before the narrative.

END_OF_DOCUMENT_TOKEN_TO_BE_REPLACED

Ego and frustration are a dangerous mix, as Creed wishes to present. It is no good to follow in the footsteps of the father, and there is a necessary need to prove yourself for what you are. That is the delightfully simple meaning behind this spin-off to the Rocky franchise. To coalesce the desire a fighter feels with his fearful mother’s rough and simple implications is one of the many great impacts Creed has on its audience. It can do so seamlessly, and effectively. That crucial blur is something the Rocky franchise would only manage half of the time. For Creed to come out not just as a superior piece to half of the franchise that laid the groundwork for it but to also dust the cobwebs off of some rather meek, inefficient direction, is an excellent way of revitalising a series that meant so much to so many.

END_OF_DOCUMENT_TOKEN_TO_BE_REPLACED

Salvaging the life and times of a man so removed from the pedestal of quality he was once known for is an uphill struggle. Sylvester Stallone can do it, so can you. Probably. Stallone, in particular though, has experience in this area. Not just as his longstanding role, Rocky Balboa, but as an artist and creative. Here he is, lacing up the boots and padding out the gloves for a sixth and not so final time. Rocky Balboa, seemingly, never ends. His end is nigh, though, and this final, standalone feature for the former heavyweight champion of the world is a strong enough send-off as he rumbles through old age, coming out of retirement and defending his abilities and his pride.

END_OF_DOCUMENT_TOKEN_TO_BE_REPLACED

When problems are unearthed, it is difficult to then return to the roots. They are no longer deep underground; they have been hacked to death by previous attempts at solving the issues and problems surrounding a bad project. Such is the life of Rocky V, a film which hopes the inclusion of director John G. Avildsen will fix the floundering style of the series. If anything, he makes it worse. He is stuffing things back into places they once belonged, but can no longer fit. It is the growth of the series and the direction Sylvester Stallone took it in during Rocky III and Rocky IV that leaves us with the ultimate battle. Not of a man fighting for his life, but of a performer fighting for relevancy.

END_OF_DOCUMENT_TOKEN_TO_BE_REPLACED

Deterioration is inevitable. As a series staggers on, there are only those rare glimmers that will outshine the predecessors. Rocky, especially those sequels that followed on from its second instalment, are ramshackle affairs that wish to fly on the wings and merit of the first two. Its rise and fall of the underdog story are complete, and now the series must, once again, turn to pastures new. Or at least, that should have happened. Instead, it opens with Eye of the Tiger and ends with the hero of America standing tall above the villain of Russia. As on the nose as sports dramas go, Rocky IV is the emotionally overwrought, uneventfully rough piece from dangerously drained minds.

END_OF_DOCUMENT_TOKEN_TO_BE_REPLACED 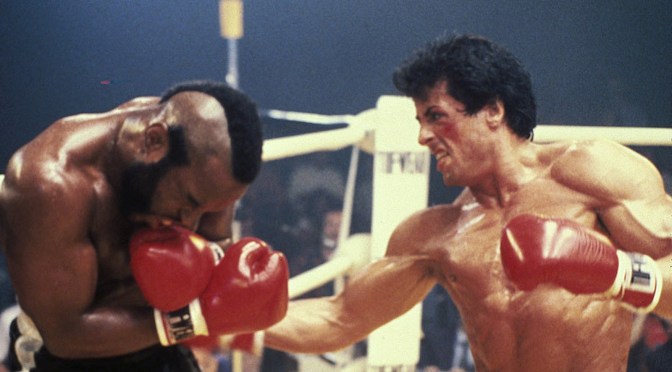 Who’d have thought Bill Conti’s immaculate soundtrack could sound so drained of life? Rocky III is the sequel that never needed to be, following on from Rocky II, a sequel that wasn’t particularly necessary either. One of the many differences between the two is that Rocky II had heart. It showed Sylvester Stallone could star and direct with competence. Inevitably, then, he would wish to strike the same notes of success again. We cannot fault him for trying, but where can Rocky Balboa (Stallone) go if he has already reached the top of the food chain? That is where we left him, and from here on in, the staple style of the franchise was lost. No longer was the series an underdog punching up, it was the famed fighter hitting down.

END_OF_DOCUMENT_TOKEN_TO_BE_REPLACED

Surprisingly, the arc of the Rocky franchise began as the underdog losing to the better-prepared man, and soon became the rise and rise of a fighter who would eventually own a robot butler. That is the magic we love to see at the cinema. “Ain’t gonna be no rematch,” is what we heard. Those immortal words closed off a story that should live on as a dependable, sentimental statement. We may lose the battle but the experience will see us out as a winner. That is not enough for the series, hence the existence of Rocky II. It is the do-over that wasn’t necessary but still provides a collation of excellent sequences, a stripping back of its antagonist, and another outing for Sylvester Stallone to prove himself an immortal champion of sporting fiction.

END_OF_DOCUMENT_TOKEN_TO_BE_REPLACED

“I don’t know what you’re talking about, but I like the way you say it.” is a good line, more for my review rather than that of Guardians of the Galaxy Vol. 2. It summarises my thoughts on this piece of the Marvel Cinematic Universe rather nicely, for I have no clue what this instalment of the franchise intends to be, but there is a part of me that enjoys it. Was this the rut? Or has it been a decade-long rut all along? The master con is not that Guardians of the Galaxy Vol. 2 has nothing going on, but that this whole phase had no real impact or influence. What better to do when there is time to kill than bulk up some of the newer characters? It is better than doing nothing at all. That would, however, imply Guardians of the Galaxy Vol. 2 does anything.