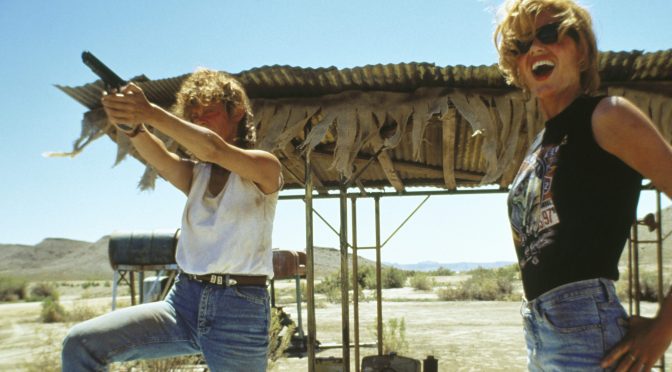 Partners in crime is a genre like no other. The open road and that rebellious attitude siphoned off into good-hearted people trying to fend for themselves and make the best of a humdrum situation. For the eponymous characters in Thelma and Louise, that reaction to the inevitable pin drop moment is a fascinating bit. Director Ridley Scott manages to capture the cultural period, the outlook of disgraced events and the follow-up of protagonist reactions with just one scene that echoes around the rest of the film with such pertinent responsibility. It is quite a stunning achievement, as the whole of Thelma and Louise is with its cast of future stars and genre-defining dynamics.

Characters come and go throughout this darkened road trip experience. The horrors of the past and the direction Thelma (Geena Davis) and Louise (Susan Sarandon) take is driven by a need to seek catharsis after a life-changing experience. It feels similar to that of The Last Detail. An adventure on the open road to delay the inevitable stand-off with reality. A littered cast that includes Brad Pitt, Harvey Keitel, Michael Madsen and Stephen Tobolowsky certainly helps steer the narrative for these two leading women, cropping up every now and then as Thelma Dickinson and Louise Sawyer hit up the surprising life on the road.

Thelma and Louise does well not just as a powerful bit of feminist text but as one that questions the reality of the post-American Dream fallout. Family lifestyles in suburbia with breaks on the weekend to head to the bar and do a line dance. It sure breaks up the fractured marriages, the cheating and affairs, the sad reality closing in. That claustrophobia is infectious and the fact Scott is so eager to get these characters out there on the open road is telling. He is itching for Thelma and Louise to take hold of their lives and get themselves out there. It shows in the performances from Davis and Sarandon, whose effortless chemistry with one another and tense, stand-offish lack of trust with those they encounter makes for some landmark scenes and incredibly rewarding scenes.

That is Thelma and Louise though. A thoroughly rewarding film not just for its cultural necessity but it’s enabling of those who want to dream big and beyond the humdrum lifestyle. Bold a change these characters may make in the face of a series of tragedies and poorly timed decisions; they at least throttle their lives into some grand escapade. Some unique pushback at the lifestyle that had been shattered so easily beforehand. That fragility toys with these eponymous characters for much of the runtime, but Scott manages the implications of it with an experience like no other. A strong cast coming together is an inevitability for the talent on display here, but the production of such a strong message is difficult water to tread. Experience behind the camera helps those in front of it capture a mesmerising state of near-grief and the reactionary desire to break free from the thankless normality Thelma and Louise had lived in for some time before it was shattered with no hopes of a return.