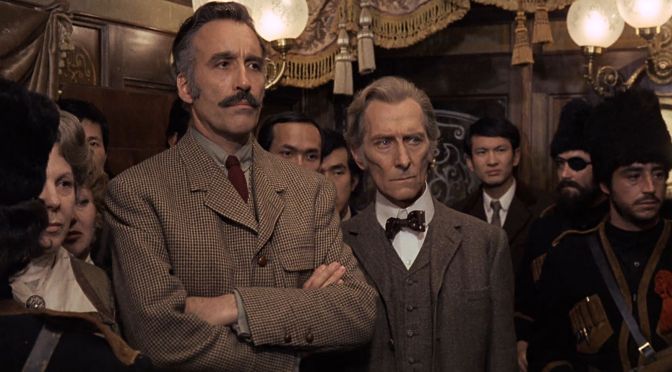 Ensembles like this, provided by director Eugenio Martín, were a dime a dozen for the Hammer Horror era and even the post-Simon Oakes era of terror. Horror Express comes hot off the heels of Christopher Lee and Peter Cushing leaving their mark as established talents, and just three years after Telly Savalas proved himself of being more than capable of besting James Bond in On Her Majesty’s Secret Service. Perhaps it is the name value that lets these films linger on the mind decades after their release. In the case of Horror Express, it is not just that, for the quality of the frights and the writing of the characters is a demanding and impressive experience.

With a cold open that throws audiences right in front of the screaming train, the horn blaring and the lights flickering, followed by an uncomfortable silence, the feeling is magnificent. Power captured and lost like never before. Martín makes it seem so easy, with beefy guitar riffs crushing the conventional high-pitched notes of the horror soundtrack. They are unusual bedfellows, but brilliant nonetheless, especially when the two fight for the attention of an audience. Horror Express has all the necessities of a tremendously haunting piece. Conflict is birthed out of the most unlikely of places. A soundtrack at war with one another, a story that flickers through strange set-pieces and excellent performances.

Horror Express devotes itself to a fundamental instinct of replication of great films. Martín has great respect for the earlier works of Price and Lee. His feature is interesting, primarily because of the soundtrack and set design, but also because of the homely nature found in Savalas, Lee and Cushing. All are finely cast, and the period piece dynamic of a murderous train journey works magnificently well. It infers not just the tones of Agatha Christie, but of Sherlock Holmes as well. Perhaps that is because both Lee and Cushing have played the elusive sleuth before, and their presence here is that of solving some vague mystery. Or, at the very least, it does feel like it. Their performances are good, rather bizarre and thoroughly charming at times. They have that appeal so inherent to their work in the horror genre. It’s quite a relief to see it work well here, with odd hats, tweed jackets and even with moments of sudden, angry outbursts from Lee. He tips the contents of a desk onto the floor, and no more is said about it.

Even with those odd revisions, Horror Express is rather fun. It has that Hammer Horror quality to it, even though it is not at all a part of such an exceptional series of horrors. Cushing and Lee play ball as well as expected, and Savalas brings out an extra jolt of energy that elevates Horror Express well beyond the earlier Cushing and Lee collaborations. He’s the unexpected flavour in the usually nice pairing. An unexpected item in the bagging area. A welcome one, like finding a special offer online or treating yourself to an extra chocolate. Not exactly the glue that sticks the film together, but Horror Express wouldn’t be the same without him.