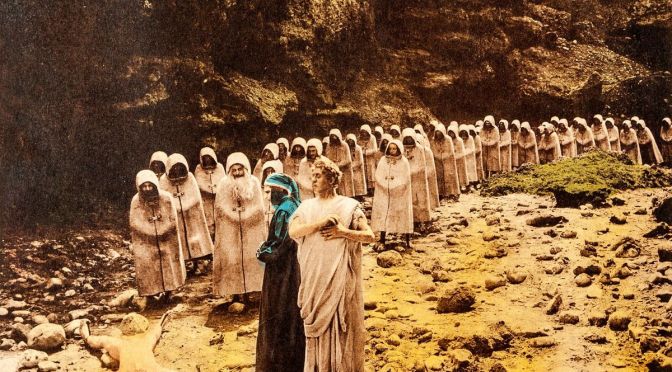 Torment is easy to come by. It is how the arts adapt it that makes it so striking and real. Dante and his work, The Divine Comedy, do not strike any note of adaptability. They depend on the poetic ramifications of a life led through hell, purgatory and heaven. Souls worth saving is very much the foundation, it is how Dante builds off of this that depends on how readers view the implication of his message and meaning. A journey that takes place on the page such as Dante’s is nigh on impossible to present visually, for its dear readers need time to understand the sins and salvation. Having that shown to us in just seventy minutes is a tall order, but Dante’s Inferno handles the text with both fascination and care.

Utilising placards to detail the story of this walk through hell and back, Dante’s Inferno manages to grapple with the strengths of Dante’s writing by including understandings of it. They are not thorough or perfect, but they can be regarded with leniency, especially when directing trio Giuseppe de Liguoro, Francesco Bertolini, and Adolfo Padovan offer their perceptions and thoughts on the legendary text. No adaptation is perfect, but the visual strokes and early mastery of the camera throughout this 1910s feature is a sight to behold. Stunning in technical scope at times, there is a layer of strong, emotive thought pushing through the divine sets and challenging subtext.

That is where the lingering effect of Dante’s work sometimes crashes out without much thought. Emilio Roncarolo offers stunning cinematography at times, but it is broken up by chunks of text and establishing shots that merely allow the audience a necessary breather after taking in a block of information. It is nice to receive a moment of solitude to think on the writings of Dante but had we desired this, surely, we would just read The Divine Comedy? Dante’s Inferno, then, relies on visuals and aesthetic purposes. Remarkable they may be, there is a question looming over them as to their devotion and hunger to display any sort of ruminating, thoughtful message.

“There is no greater sorrow than to recall our times of joy in wretchedness,” Dante once wrote. While Dante’s Inferno does not get to the core of that quote, it does come close. Taunting its audience with the fear of eternal damnation, and looking good when doing so, Liguoro, Bertolini and Padovan craft chills and intricate fears that rely on their imagination and the audiences’ belief of Dante’s writing. Inevitably, Dante’s Inferno is tied closely to its writing, but it is an adaptation that depends wholly on the text translating to the screen with clear instruction and effect. It is unlike the modern days of the text adaptations, where leniencies and changes are not just expected, but encouraged. That would not go far with the perfect prose Dante presented, and the fascinating adaptation of his words found here. Although they deviate at times, it feels like a credible enough understanding of Dante and the themes he presented throughout his masterwork.