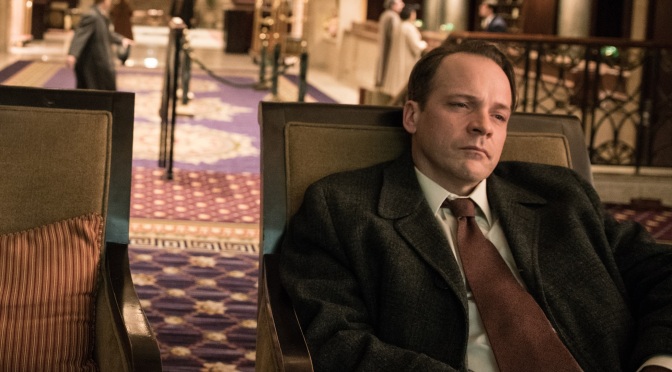 Mired by mystery and affected by hushed characters, Wormwood blends people, genres and style with devastatingly muted effect. As Frank Olson (Peter Sarsgaard) falls from the window of an apartment block and Perry Como’s No Other Love crashes through the speakers, Errol Morris sets the scene for another romp through the troubled lands of reality. American governance and its desire to cover up the controversy of its own doing is a worrying sight to behold. Morris has spent his career documenting such cases, and his Netflix miniseries sees him pick apart a little-known case with a big-name cast. We must always question the integrity of government. Is it Morris or Wormwood that question these powers so well?

Morris’ editing choices are questionable at times. Cutting a static interview into a collage of frames and mirrored effects would distract from the talking heads interview had anything interesting been offered. Circumventing the rather banal and unfortunately boring status of these interviews, his cutting and editing style here feels more a panicked response to lacking effectiveness, rather than artistic development. The Fog of War did not feature fanciful cuts or techniques that desired some credibility as an artist, Morris’ work there is through a thorough analysis of his source. He lacks that in Wormwood, and his abilities to ease the conversation in the right direction and down a new avenue of thought is not present within this miniseries.

What is present, however, is an abundant reliance on the adaptations of reality. Always a pleasure, Sarsgaard makes for likeable leading material, but there are more than a few wasted opportunities. He never captures the camera as best he should, more due to the breaks we have from his performance to get the real-world details than anything disappointing about his performance. Frank Olson is brought to life enough to cement him as the focus, but never often enough to consider him a fascinating moment in the world. His is one of many tragedies that humanity has trudged through, and Morris does not have the equipment to hand here in bringing Olson’s world and work to life. Not in a manner that feels credible as a documentary, or dedicated as a recount and reworking of his life and times.

A shaky, shoddy blend of documentary and drama, Wormwood utilises its blurring of fiction and reality with the conceivable notion that the former is doing the heavy lifting and propping up the latter. Even Sarsgaard and those poor souls around him are struggling to pull the interest out of this oddity of America. It has the residue of awards clamouring to it, and that makes it feel uncomfortably placid in its references to story and what it means for the modern world around us. Both parts biopic and documentary flounder around with hopes of grasping for something bigger and better. They are not without their moments of brilliance, but those moments are far too slick and shallow to propagate any thoughtful ideas.