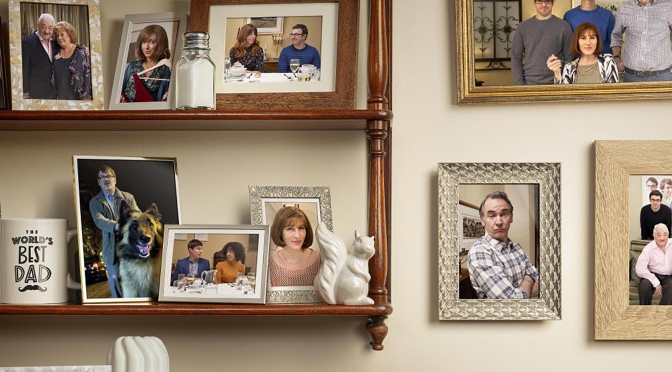 A dark day indeed when we lose the comedy greats. It is a great shame to lose Paul Ritter, and beyond his roles in The Limehouse Golem and Chernobyl, he will, inevitably, be remembered for his work on Friday Night Dinner. Infectious, light fun that gives as good as it takes. It is how Robert Popper, writer of every episode, crafts these stories and similar tones that we must cherish. That is the aim of Friday Night Dinner: 10 Years and a Lovely Bit of Squirrel, an initially earnest documentary trying to understand the love of the show that turns into a puff-piece feature set on showcasing the basic notes of a show that some may, somehow, be unaware of.

There’s an awkward, fourth-wall-breaking layer to the show. Prompts and obvious nods to the direction of other talking heads feel strained and are the only pacing the brief moments of interest can offer. What aren’t brief conversations with a few available celebrities are instead voice-overs of the favourite moments and those “poignant and emotional scenes,” apparently, Friday Night Dinner has those. Killing off a dog with no real impact and then cutting the documentary to blooper reel footage is not the most poignant of directions, but then this is British television. Has comedy ever really had such a grand production value where we are interested to see what goes on behind the scenes, and why? Peep Show perhaps, but only because the style of recording was a novelty and the behind-the-scenes footage is cut and dry, rather than this watered-down, overemotional swan-song to a television series that barely managed four episodes a year of its decade-long running time.

How many times a narrator can mention there are thirty-seven episodes of Friday Night Dinner is just ridiculous. Despite existing for a decade, there is very little to discuss about the hit Channel 4 show. “It’s a very small cast of people basically doing the same jokes week in and week out,” is meant as a compliment from one of the many “celebrity fans” and not as an insult to the quality of the show. There is an exceptional layer to the simplicity of Friday Night Dinner as a show, but this package deal riffing on the best bits and showcasing the blooper real is as cheap and tacky as the rest of them. It is not much a celebration of these actors, for Friday Night Dinner that just fine.

The show itself is strong, unlike this documentary. With a nice tribute to Ritter, Friday Night Dinner: 10 Years and a Lovely Bit of Squirrel avoids being a complete waste of time, but even then, it feels more a piece for the severely dedicated fans than the passive audience. A usual, hour-long piece filled with jolly narration and talking heads reminiscing about their roles on the show. It is of little interest to so many, because there is not much to say. Characters that have kept themselves identical episode by episode offer brief insights. It is no surprise that Ritter presents the most charm and honesty in discussing his role, as does Mark Heap. It is a pleasure to see them talk about their roles, but it is not eye-opening or even all that interesting.