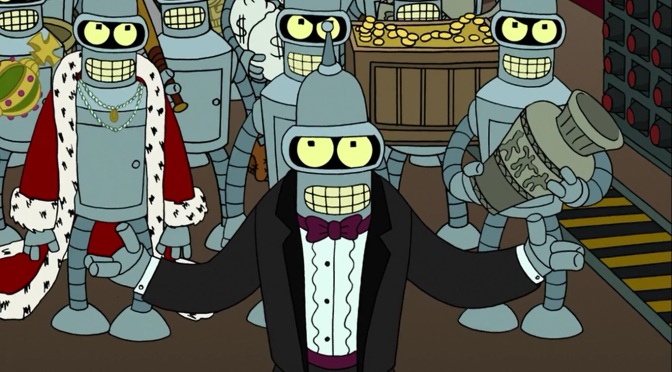 “You were fired two years ago, that’s when we were fired by the delivery network,” opens Professor Farnsworth (Billy West). His miniature tirade, calling those who cancelled the show “asinine morons,” saying they were “not just fired, beaten up too,” and “ground up into a fine, pink powder,” is, presumably, the fate that met with those Fox executives that decided to cancel Futurama in the first place. Fair play to them, they have seen the error of their ways and given full, free comedic reign to some surely disgruntled employees. Futurama: Bender’s Big Score is the first of four feature films the Futurama team created after their return to the big leagues of cable television. Filled with meta humour for the many returning fans, it is like they never missed a beat.

Their immediate return to form can be summarised, primarily, by the strengths of the voice cast. Everybody returning to give it their all, there is a defined role to play for West, John DiMaggio, Katey Sagal and the rest of the Planet Express crew. For fans of the series, there is a layer of intricate, smart comedy that should be expected from veteran writers and cast members, but for newer audiences, the cult appeal of the show’s initial run may be lost somewhat. There is still enough humour, character and heart within to win people over, and it’s not like they’d need to start from the very beginning, but the context and leading plot of Futurama: Bender’s Big Score suggests a bit of background knowledge couldn’t hurt.

Time travel is a fickle concept, but Futurama: Bender’s Big Score is surprisingly smart. Alongside that piece of back and forth through the timeline, romantic subplots are abound for half of the cast. It is incredible how well director Dwayne Carey-Hill can balance these topics, especially considering few of them overlap or have all that much to do with one or the other for the first hour. Incredibly smart writing is the reason for its success, and where the film truly comes to life is in its big reveal, flashbacks and time travel humour. Knowing not to mock or play second fiddle to the established conventions of the genre, Futurama: Bender’s Big Score has a unique spin on the time travel concept that comes and goes as it pleases. Moments where it is integral to the story are interspersed with that fourth-wall-breaking meta humour that makes it clear these characters couldn’t care less for the laws of time and space.

Rewatching classic nostalgia pockets has been eye-opening. Hermes’ name is a pun on the delivery service, surely? Twenty-one years I’ve been on this populated rock, and I’ve only just considered that. Futurama: Bender’s Big Score is the joke that keeps on giving, with a criminal level of puns, one-liners and recurring gags that see the return of this space-venturing crew. They do it with style, anger, and grace. Plenty of jokes, the strengthening of characters, and the tying of loose ends that these animators and writers were probably scared to leave tangled, for fear of a second cancellation. It wasn’t an impossibility. Four movies and two seasons later, Futurama was cancelled once again. This is just extra time, to take the characters where we shouldn’t expect them to go, Futurama: Bender’s Big Score is perfect for that.