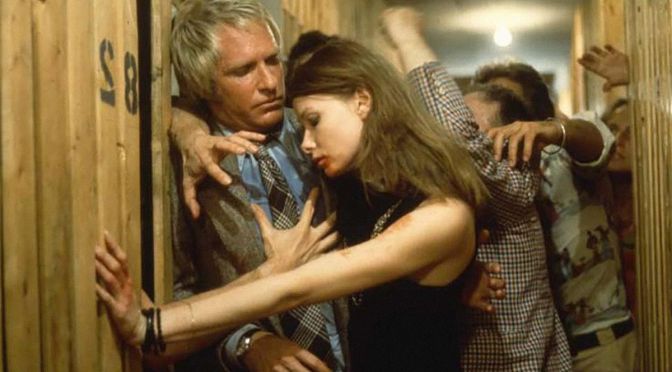 Suburban, apartment living turned on its head by the man that once turned Jeff Goldblum into a life-size fly, Shivers represents those ever-pressing notes of commentary from David Cronenberg. He has, once again, paired it with the intensity of his body horror. I cannot say the idea of body horror in a stuffy apartment block as a concept does not appeal to me, but in execution, it is a clumsy, laboured process. Shivers benefits from being an early piece of work, and most infractions can be accounted for and forgiven. What cannot be forgiven, however, is how these people decorate their homes.

Surely those out in apartment blocks have the freedom to design their apartments any which way they please. Clearly not in Shivers. These people live in breeding boxes, no wonder a parasite makes the rounds and turns them into mindless beasts. Cronenberg is on hand to guide this story of primitive power in the right direction, and it does go that way for some time. Some moments linger on the mind far after the film has ended. Roger St. Luc (Paul Hampton) finding himself surrounded by parasitic vermin, his former neighbours, and giving in has such a powerful punch to it. But it is not utilised well for what the film wishes to see. If anything, it side-steps the real reason Cronenberg is putting this together, and he misses out on what should be an opportune reading of the world he has created.

We should never doubt the confidence of the creative, but Cronenberg was surely nervous when constructing this piece. It shows in his directing at times. He is jittery, awkward and hoping nothing falls out of place. His first feature film is a solid enough start. Setting out the groundwork for what will come in the future, it is good to see where his brand of body horror would go. It is not, however, a great example of what he can offer as a director. Shivers never quite displays the brooding tensions necessary to his finer pieces. While his creativity in writing certainly shines through, its application sees no visual change, something that his finest films often offer. The lack of space to provide something disgusting or gross or even those body horror charms is the fatal flaw of Shivers.

A couple of spotty moments prevent Shivers from being a wholly rewarding or interesting piece, but Cronenberg offers strong themes throughout. His cast could use some work, but they are on hand to at least try and present the horrors of apartment block living. Breathing the same ill air as others, taking over the block with parasitic beasts, what is not to like? Quite a lot of it, honestly. Most of it is casting issues, and the slight fumbling’s from behind the camera. Cronenberg realises early on into this feature that he has a good idea and knows where to go with it, but technical limitations and a lack of experience prevent him from taking it to the heights it was never destined to hit. He does well to get it this far, with the tools provided to him.