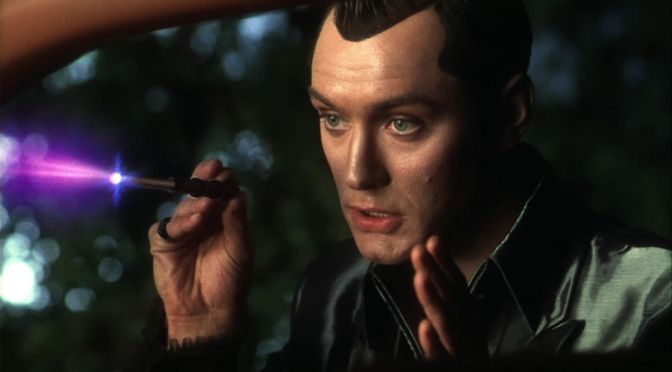 Eventually, we will be overrun by robots. So many films are saying it will happen, and I am hard-pressed to agree with them. A.I. Artificial Intelligence sees the world in a panic. Rising sea levels have wiped out a good chunk of us, and in the place of these casualties, artificial intelligence is created and brought to the world. They struggle with their emotions, and cannot convey them whatsoever. That sounds like me, honestly. The key for A.I. Artificial Intelligence, then, is that director Steven Spielberg wishes to access the idea that these man-made machines will soon develop emotions. That is why humans are necessary, to depict those of us who are genuine, and those that are artificial, created to kindle happiness and efficiency.

Replication of reality is the purpose. “There is no substitute for your own child,” Monica Swinton (Frances O’Connor) yells. She is right, but the illusion presented to this grieving couple is too good to be true, is it not? David (Haley Joel Osment) is introduced to Monica and Martin (Jake Thomas). Osment’s performance is incredible. Striking it may be to see such talent in youth, Osment is up to the task of displaying an emotionally engaged robot. The impact his consistently happy stasis has on Monica and Martin is far more pertinent and pressing than any emotions the parents display. This first act is strong and allows Osment to fulfil the part of a robot with feelings exceptionally, but then he is paired with a bear and an antagonist. At least Jude Law swoops in soon afterwards, with hair that looks like it’ll pop open like a hub cap.

Spielberg presents an inherently powerful film, but it is off of the back of other merits that he accomplishes this. A brainchild of Stanley Kubrick, A.I. Artificial Intelligence is not an original concept for Spielberg. He does not deal in originality. Credit where it is due, though, his direction offers desirable qualities here. Utilising colour and modern iconographies, rather than the sheen and dynamic of a sci-fi slaughterhouse, makes for a natural film with good character progression and strong performances. There is no desire for more than that. Spielberg is fine to, once again, have no emotional sway on where the film goes. It is open for interpretation, and how artificial works imitate and mimic the real world is such a strong narrative choice, it becomes rather strange to see Spielberg is shy to the cause. He has nothing brilliant to say, merely shows us his definitive, strong work, and wishes for us to move on. It is up to characters and dialogue to produce these effects of love and care.

A tender understanding of how we can treat others as our own, A.I. Artificial Intelligence has the makings of an emotionally rife, powerful piece, but shies away from the striking, personal moments. It is no surprise, though. Spielberg and personal filmmaking do not go hand in hand, but on the rare occasion he shows his weaknesses of character, they make for formidable, daring and gifted scenes. It is a shame he does not rely on this more often. Instead, he makes palatable, broad, popcorn-munching moments for all to enjoy, but for none to gain anything from. A.I. Artificial Intelligence has a handful of those moments, in this ode to Stanley Kubrick, the man who gave Spielberg the solid, sturdy foundations of science fiction with feeling.