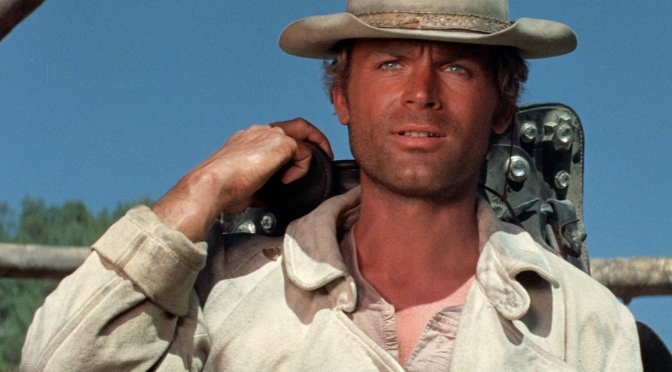 Art can often imitate life. Was it an imitation of life when Henry Fonda signed on to portray an ageing gunslinger? He was, indeed, ageing, and had found much comfort in the realms of western genre flicks. From as early as the 1940s, alongside the titans of John Wayne and Anthony Quinn, Fonda could be found figuring out revolvers and saddles. He would stick around for as long as Wayne did within this genre but would venture far further than The Duke would ever go. Wayne was never pursued by a man named Nobody (Terence Hill). My Name is Nobody is simple enough in context and content, but it is the daring variety from director Tonino Valerii that gives the film that extra kick.

Not so far removed from Valerii’s previous work with Day of Anger, the core concepts of the western are present and well placed. Gunfights are essential, as are the dusty cowboy boots. The wild west was only as wild as its people, but there was a sense of containment and simplicity to a lot of it. Gritty men and grizzled facial hair dominated the period, but with My Name is Nobody, much of the violence and severity is soaked in a comedic context. Those notes of humour do not always work, but Valerii is keen to press on, and does so. It is one of his many admirable qualities, and they would surface in his work time and time again.

My Name is Nobody has several components that don’t necessarily gel well with what a genre piece is now defined by. We do not look back on the era of western domination and think to ourselves “comedy was the key to unlocking this.” These pieces are notorious for their hard-hitting violence, their exceptional gunplay and their quick turnaround. My Name is Nobody, then, drifts away from that. It feels fresh, yet has all the usual components that would litter the likes of A Fistful of Dollars, Requiescant and Day of Anger. To be honest, that is probably the point. Eliciting feelings of the finest the genre had to offer, but replacing the slower touches of dramatics with light-hearted foolishness. Hill and Fonda work excellently here, riffing off of one another not because they have exceptional on-screen chemistry, but quite the opposite. Jack Beauregard (Fonda) wishes for a quiet retirement, but Nobody is having none of it, he believes his hero should go out in a blaze of glory. Some pockets elicit old tropes, they are not replaced, but slot next to new and inventive practices.

Range. That is what My Name is Nobody is a showcase of. Not just for Valerii, who takes the western stereotypes through unlikely genres, but for Hill and Fonda too. They are out of their depth and adapt quickly, keenly learning the ropes of a whole new experience. It is their comfort in the tropes and uncertainty at where they are headed that keeps this Valerii piece so fresh and exciting. At its core, it is just another spaghetti western. Some of the humour falls flat, the leading character is a bit of an oddball, but it works so well because it tries to be so different to the other films releasing at the time, yet takes no jabs or jokes at them. Self-contained comedy at its finest, ribbing itself, rather than the films that inspired it.