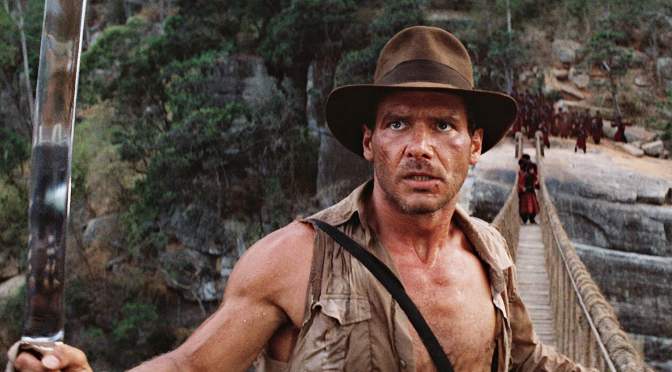 Identifying popular tropes in trilogies is an odd, regressive opportunity. Where the notion came from that the second in the series is always the weakest, I do not know. It is not an inherently true ideal when we consider the superiority of Evil Dead II, Terminator 2: Judgment Day and, dare I say it, Back to the Future Part II over their freshman efforts. But those are probable outliers for a wider problem. Indiana Jones and the Temple of Doom is a testament to that effect. Some of us are brought up thinking the bookends of a series are the finest offers. In the case of Harrison Ford and Steven Spielberg’s whip-swinging collaborations, that would be true.

“Anything goes…” Willie Scott (Kate Capshaw) croons in the opening moments of this extravagant affair. So it does. Anything indeed. With a brief ode to the early days of Fred Astaire’s iconoclastic dance routines, there is a blurring of reality that Indiana Jones and the Temple of Doom never escapes from. Its camera pushes forth into a small opening and emerges on a grand sound stage populated by dancers. Where Raiders of the Lost Ark based itself on religious texts and believable archaeology, Spielberg’s direction in the follow-up jumps the shark. It is bombastic and bright, colourful and quip-worthy. That is all, though. Reasonably it tries to bring more of what we love to the character of Indiana Jones, but it lacks depth and love. It re-treads much of the same ground as the first. There are great moments of violence, quality fight sequences, and an underwhelming set of supporting performers.

Where the first relied on established actors in villainous realms, the sequel tries to coax lightning into striking the same place twice. I keep thinking about the opening musical number, and what Capshaw brought to the table. It is not much. Where Marion had depth and independence, Willie has little more to do than be the damsel in distress. She whines, cries and screams. Short Round is also present, quipping away as if there were no tomorrow. That is the issue. Where Raiders of the Lost Ark has that natural cohesion of well-written moments and memorable dialogue, the sequel tries to capture the heroic efforts and comedic chances. There is a dreadful similarity between the first two films that stretches far beyond the conventions and characters. An impactful opening, a bit of a break to reveal aspects of the story, and then a bombastic bust-up at the end to bring some form of continuity to the series. Spielberg should not try and reinvent the wheel, but a new colour scheme offers a nice variety.

It would have saved Temple of Doom from feeling like a lesser, inevitable moment that followed the first in the series. To its credit, there are scenes within that are akin to the style and tone found in the first film, but it is not adapted with the confidence of consistency. Moving the relatively believable foundation with a tint of fantasy and legend up the scale to big, brainless bigotry is an odd leap to make, but an expected one. With or without that, though, Indiana Jones and the Temple of Doom is an exceptionally poor film. Without the stock supporting characters, you have a shell of a leading man, far away from what his character’s potential could have been. We should be thankful he didn’t hang up the hat after this one, quality was on the horizon.