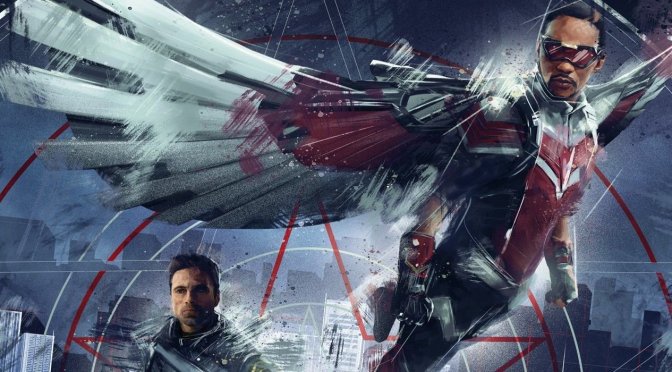 The endgame of Avengers: Endgame has finally received clarity. Truthful, real intentions of Marvel are now upon us. They have spun an ending that impacted not just the audience, but their way of working too. Why slow down content and production when you can schedule enough television programming to never have a lull in content? Efficiency does not equal artistry. The machine trundles on, no signs of breakdown are clear just yet, and Falcon and The Winter Soldier is another product of that sturdy, strong, metallic grey vehicle. It is sleek, finely tuned, and utterly devoid of life or spirit. Interest wanes quickly with this one, and the façade of unique vision in WandaVision was at least a brief comfort. There’s no time for that with Falcon and The Winter Soldier.

Marvel explore the one topic they feel comfortable wading through, grief. Bucky Barns (Sebastian Stan) tackles the grief of killing the son of his neighbour for an episode before they get bored and move on to the less-exciting but more pressing issue of international terrorism. Flag Smashers is their name and their moral stance is as bad as the name they’ve been baptised with. What more can be said of them? Presumably, the hundreds of other murders Barnes carried out are all just water under the bridge, especially now he has taken a brief respite to venture up the moral high ground hill. As for Sam Wilson (Anthony Mackie), he tackles the grief of losing out the Captain America role after retiring the shield and continuing on with his Falcon identity. Mackie and Stan are probably capable of doing more with these roles, but the script is, as expected, scared to come out of its shell. It plods through acceptable themes that Marvel enthusiasts will always pick up on, and producers will have ticked the box of. Grief is a theme prevalent in all of their pieces, as it is the only theme they know how to display. They don’t even display it well

Take the scene where we are shown Barnes’ initial grief for the next-door neighbour. The grief is built on the premise of their friendship, and the underlying truth that would shatter it all. While the performances are good, it is the blob-like substance of meaning that hounds this one into mediocrity. A sad shame that this does not crop up again. Not in any meaningful way, anyway. Falcon and The Winter Soldier becomes too bogged down in building up and cracking down a villain in six episodes. Somehow, these one-piece villains work well for the big-budget spectacles of early Marvel iterations but are tremendously underwhelming in the show. We cannot hide behind the calibre of actor, for Julia-Louis Dreyfus and Wyatt Russell are both exceptional talents elsewhere. Just not here. Never here.

It is hard to care for characters who left little impression when they were together in the feature films. As the episodes get longer and longer, the writing gets poorer and poorer. By the final episode, the pacing and writing have hit their lowest point. It makes WandaVision look Lynchian. Are we meant to feel bad for the terrorist teenager or the knock-off Captain America who spent three episodes bludgeoning people to death with a shield? The answer, according to director Kari Scogland, is both.

Falcon and The Winter Soldier certainly has a direction, but what it is meant to do or where it wishes to go is lost entirely. The back and forth, buddy-cop moments of Sam and Bucky is of no interest besides one or two lukewarm lines and amicable performance. What lacks here is subtlety, because at this stage, if an audience misses out on the one or two key details that need to be employed in an audience the next time these characters crop up, then there is no turning back. Falcon and The Winter Soldier will be the springboard for something, but that something will need no more than one or two summary lines to hit off the next phase of this never-ending circus. It is boring and unnecessary, with forgettable, placid villains rubbing our one-note heroes the wrong way for six filler episodes. Insipid and uninspired, but with a tinge of military propaganda to it, rather than a rip-off of popular television eras.