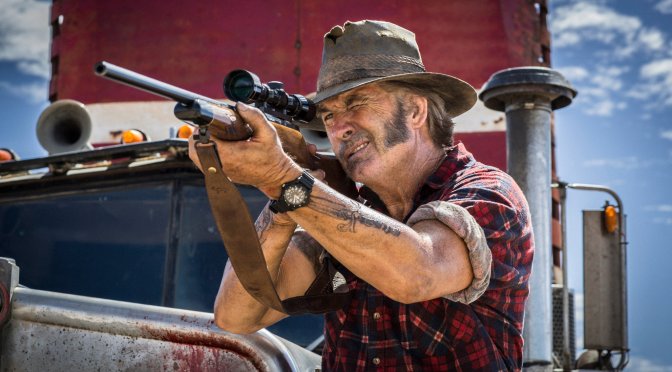 My experience with Wolf Creek was a surprising one. I had not expected to enjoy it, for my stomach is queasy and my patience for mindless slashers is somewhat limited. It impressed me with its engaging, deranged antagonist, something which Wolf Creek 2 understands is its lead strength. But it is relying on this strength that undoes much of the work found in the first piece. Lingering on the mind of Wolf Creek was the idea that Mick Taylor (John Jarratt) was a genuine creep and a threat to those he encountered. He still is, but Greg McLean’s direction takes him down a route of self-parody almost.

More backpackers litter the great Australian outback and meet with much the same fate as the first batch of doomed explorers. Looking for a good time in the dusty trails where Taylor lingers is, seemingly, a tremendously poor choice. Another poor choice comes in the form of what Taylor becomes. He is no longer the overbearing, friendly stranger who slowly falls into despondency and dangerous tactics, he is now just a man willing to go wild on anyone he crosses paths with him. He has his few notes of anger, which trigger that inner carnage, but they are happenstance and silly. With no real depth to them, it is difficult to see Taylor as any form of commentary or even that of a strong, conscious villain. Had these characters left him alone, they would be fine. But where is the fun in that?

Where the fun should come into play is the final confrontation between Taylor and one-note protagonist Paul Hammersmith (Ryan Corr). Critics may have had initial praise for their performances, but the cruelties of time have not taken well to Corr. His climactic scene and confrontation with Taylor is rushed and soon becomes overwhelmed by silliness. It is clear to see where McLean wishes this relationship to go, but he is unable to choose one emotional topic to focus on. The result is a car crash, with Taylor’s erratic behaviour becoming more of a space for Jarratt to display his range than for Taylor to become a menacing threat like in the first. But we’re already supposed to know this, and McLean takes that for granted.

Wolf Creek was a vaguely realistic horror show that devolved into a caricature-like state of slasher villains and scantily-clad protagonists. Wolf Creek 2 starts there and slips down the slope even further. It careers over the edge, and at that point, it is up to the audience to enter the brace position and prepare for a crash that would not warrant the gore and remitted themes of violence and dark comedy. Sloppy at times, and certainly not as clear cut as the first, Wolf Creek 2 suffers from overindulgence. What works for the first should surely work for the sequel? Perhaps, but McLean forgets the crucial rule when making a horror sequel. Less is not more. Less time to build Taylor does not give McLean the rite of passage to turn him into a cross between Jigsaw and Barry Humphries.