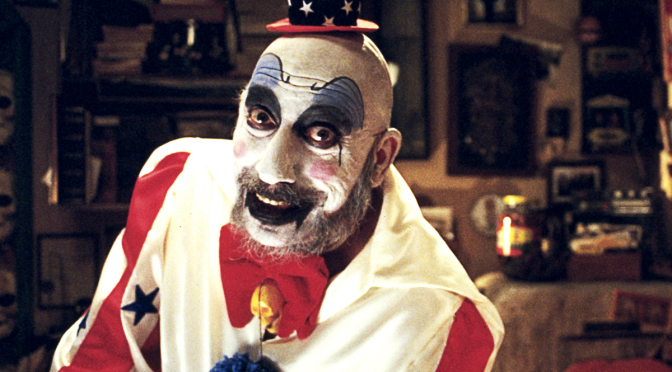 Existing in various fields of art for decades now, Rob Zombie remains a consistent, well established and highly regarded individual among his peers and contemporaries. From successful metal frontman to brushing shoulders with Quentin Tarantino, and being handed the keys to the Halloween franchise (albeit temporarily). House of 1000 Corpses marked his debut into the world of feature filmmaking.

With a wildly complicated production history spanning several years and various handover’s of ownership rights, House of 1000 Corpses hit screens in 2003 and tells the tale of two teenage couples travelling across the backwoods of Texas. They search for urban legends and serial killers, ending up as prisoners of a bizarre and sadistic backwater family of serial killers.

The narrative of the film was not a particular highlight. Mainly due to the jarring fragmentation of subplots involving the Firefly family and the town’s police department. The story falls by the wayside. It becomes a little muddled and that feels intentional. It’s quite postmodern in a sense, the homage and the atmosphere within it, is the main attraction here. A true love letter to the genre of horror, especially a bygone age certain purists may well deem as a ‘golden era’.

The genre of horror itself is a difficult one to navigate. There doesn’t seem to be any kind of spectrum to its quality. The revered greats and classics all seem to be pre-2000, and the dawn of the millennium (though with rare exceptions) brought this devaluing of the art of the medium in favour of capital, hence the slew of sequels, reboots and certain sub-genre booms that have little more beyond shock value. Zombie is a cinephile. That passion, coupled with his security in artistic identity, rings true on the big screen in a fashion like no other in his field of contemporaries.

Zombie blends his unique ‘outsider’ attitude with endless homages to the 1970s culture of horror, the ground-breaking era in the history of the genre. Time may well have pressed on since then, and with a new wave of filmmakers stoking the fires of the social thriller, there is most definitely still an audience for something more pure and rooted in the visceral, a sentiment applicable to each instalment of Zombie’s ‘Firefly Trilogy’.

There is an intermittent issue with the immersion of the relationship between narrative and tone. Whilst there is no issue with convention, especially in a genre film, something is a little off here. At the very least, it is hit or miss. Wes Craven is evidently a major influence here but House of 1000 Corpses falls a little short of the success of Scream. There is a similar undercurrent as both films aim at satirising the wider genre of horror, but despite his extensive knowledge of that realm, Zombie’s attempts fall flat.

Once the pacing finds its feet, House of 1000 Corpses is a thrilling experience. The narrative’s setpieces are quite frequent and well-realised, though that does link back to the tonal inconsistencies. Talking exclusively in terms of horror cinema, they are some of the greatest single instances I think I’ve come across. The cold opening is incredibly atmospheric and inspired, blending TV advertising with freakish horror. A petrol station and novelty store of terrors blend, with a roster of rural oddballs sharing tales of the grim. We’re introduced to glimpses of what’s to come along with an idea of Zombie’s kinetic filmmaking and writing approach.

Given this marked the maiden effort from Zombie in directing outside the length of a music video, one would suggest he took to the demands like a duck to water and, if anything, was perhaps aided by that earlier experience. With this consistent hyper saturation of colours, some scenes feel as if they’re shot with a filter over the lens, or take advantage of neon lighting. It’s far from the almost seizure-inducing music video for Dragula, but is most definitely a ‘relative’ and lends to the style of horror itself, one that adds to the rural, outsider aesthetic cementing itself as this neo, video nasty shock value terror. Rob Zombie’s auteur style, while his filmmaking endeavours have peaked and troughed as far as quality is concerned in the years since, always has a handful of recurring features that define them and promise, at the very least, a certain style of atmosphere if nothing more.

In his ode to the era of explicit, gory and borderline exploitation horror, Rob Zombie stumbled on an audience that was clearly unquenched in their thirst for such a film. The cult appreciation that has since amassed, bubbled, and grown for this jack of all trades.