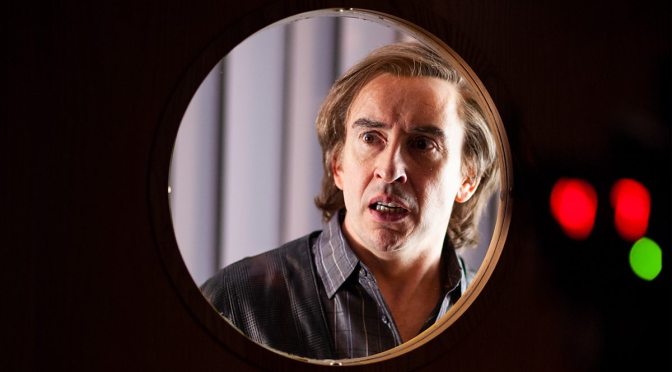 British A-lister Steve Coogan returns to his career-defining role after what was – at the time – an eleven-year hiatus from Norwich’s finest outside of throwaway short appearances. Declan Lowney’s film sets East Anglia’s finest son in a low point of his long, incident-filled career. With his radio station in the midst of a conglomerate takeover, our oblivious leads decisions trigger a chain of dominos resulting in a hostage situation that he must navigate whilst also juggling his public image.

Comedy is such a volatile landscape of subjectivity, which isn’t helped in the slightest by different national tastes, niches and specialities which is one of, if not the main drawback of Partridge’s feature outing. It panders to newcomers who are likely unfamiliar with this slice of British culture and as such, allowances made have an accommodating effect. They do rob a little from those who’d class themselves as a fan of Coogan’s work. Contrivances to heavy exposition, it does take a little time to move into a decent pace and is, at times, guilty of lulling slightly to bring what would be an uninitiated audience up to speed. When it’s in full flight, it does make for a pretty entertaining and unique spin on the Partridge piece.

Narratively, this is best considered a one-off, given it hasn’t been mentioned in any of the following installations to the long-running Partridge arc and, in that sense, it was a good hark back to Coogan’s career in the early 2000s, especially when this figure has become synonymous with his image. Don’t be fooled by my words into expecting some kind of grand 80s sort of action film, this is far from that ‘golden age’ of the genre but as a concept, I do find it to be realised quite well. Lowney, to his credit, strikes a fine balance, there is more than enough time afforded to character-driven work which lends itself to an impressive performance from Coogan in a physical and typical acting sense. This really is a one-man show. Sure characters like Lynn and Michael have appearances, but outside of Sean Pertwee’s Police Specialist, nobody really takes the mantle from Coogan who is responsible for this film’s success.

A little of the Partridge charm is lost here. It’s a direct result of playing to a new audience and, comparatively, Coogan gives something more dialled down here. Lacking in that oblivious obnoxiousness that can be found in the TV outings whilst also being vacant of that twinge of awkwardness, it’s refreshing to have a new spin on the character and is a lifeline in translating it to a longer runtime. The supporting cast really don’t amount to anything beyond cameos from notable faces of British comedy and drama, which is perhaps its biggest downfall away from its identity as a whole. This is an entertaining film but doesn’t really pack the substantial punch of any of the series and the supporting cast were responsible for elements of that. Whether they were the punchline or butt of the joke, or simply played off the titular lead, the supporting character is key to this concept. It falls in quality when that equation isn’t fully complete.

Alan Partridge: Alpha Papa is no doubt somewhat of a polarising film. Whilst it is easiest to tolerate for those who consider themselves fans of Coogan’s finest work, one can see how going in cold and blind would produce little more than a cliche and muted action comedy with the odd laugh scattered throughout. World’s away from the quality of TV and web-platformed content dedicated to Partridge, it is nonetheless a decent ‘rainy day’ watch for those who might find themselves tempted to do so.