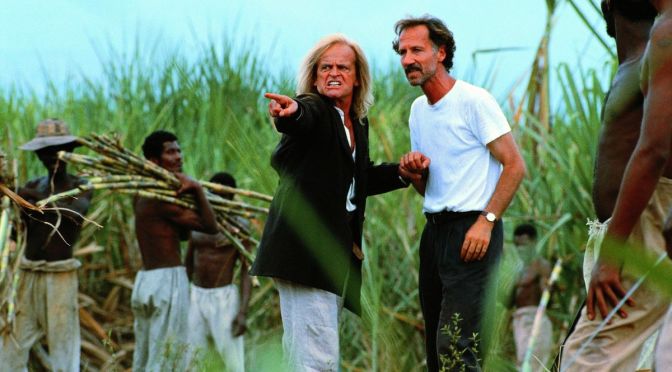 Fragile is an understatement for describing the working and personal relationships between director Werner Herzog and actor Klaus Kinski. Their connection to one another was wrought with troubles, tensions and a bloodthirsty intent for both men to kill the other. From declaring himself the Messiah to his bouts of erratic behaviour, My Best Fiend hopes to document the manic lifestyle of Kinski, with Herzog at the helm of it all. A bulk of it focuses on the Aguirre: The Wrath of God and Fitzcarraldo era of their working relationship, but Herzog makes sure to stop off at the homes they shared and the landscapes they fought in.

Uncompromised detail makes itself a staple part of the documentary, layering the voice of Kinski over the scenes that return to locations of their bust-ups and reconciliations. My Best Fiend is a rare occurrence, where it is better to hear of events, rather than to see them. Herzog is the ever-dependable narrator, who audiences will rely on to engage with the scope of the horror Kinski and Herzog presented to the crews that dared to collaborate with them. A handful of moments are brought to life with footage from the film or, in rare circumstances, actual footage of these terrifying moments. Herzog is as in the know as his audience. He may have been present for these events (and sometimes even the catalyst of them) but he has no idea why it happened. To that extent, My Best Fiend feels like a man attempting to understand the mind of one of his closest collaborators, and the layered problems Kinski had not just while working, but in his life also.

His mental illness and personal shortcomings aside, it is clear that Kinski is not a perfect man. Perhaps that is an understatement. Much of the documentary is dominated by archival footage that showcases the public spats and circulating hellfire Kinski caused. My Best Fiend examines the mania behind the artist, rather than the actions. Here though is where Herzog misses the trick. The key to unlocking his narrative and answering the question that burns away inside is to consider the personal aims of Herzog, rather than that of the professional. Herzog never quite gives the greatest scope available on the project, but he instils the major themes and integral values necessary for understanding the love and hate shared between the two of them.

Unconscious bias is sure to prevail. Herzog may take us through his life alongside and against Kinski, but it also gives his perspective as the more rewarding and grounded of the two. Perhaps that is the truth. Only Burden of Dreams will be able to shine further light on it, not because it offers up any new information, but because it is the closest audiences will receive to an unbiased account of events that, coated in deceit or not, are insane. Kinski was unhinged, that much is clear not just from My Best Fiend, but the legendary stories and articles that are depicted, to some degree, throughout this Herzog documentary. But what is the reason to that mania? A passionate hatred for his fellow cast and crew? Or something that lurked far deeper? Herzog hints that it may not be as black and white as that, but never reveals his true thoughts. He humanises the beast whilst showing its venomous fangs, and the narrative nearly crumbles in on itself as the two fight for the spotlight.