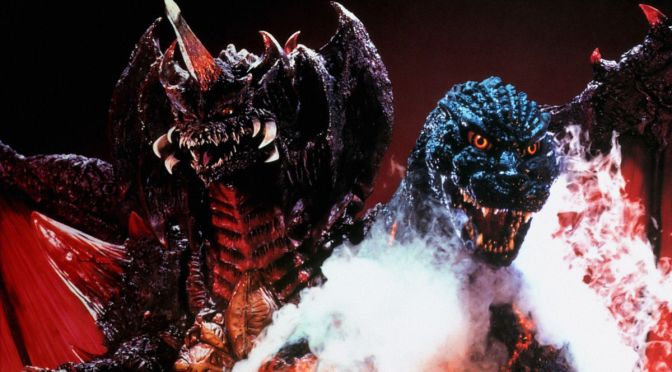 As if the plight and horrors of atomic warfare weren’t enough, Godzilla vs. Destoroyah pits Asian culture against a kaiju on the verge of a nervous breakdown. While the series was beginning to wind down, the waning years of the Toho era decided to pull out all the stops. One last hurrah for a series of films they had depended on since the middle of the 1950s. With flash, futuristic tech taking on the titans of land and sea, Godzilla vs. Destroyah uses people and buildings as mere background noise. Setting the stage for its all-out warfare, the fond farewell Toho temporarily gave Godzilla is a finely tuned piece that collates the biggest and best moments of the series thus far.

With such strong themes throughout, it is quite surprising to see director Takao Okawara balance these moments of subtle criticisms with the booming, exceptional damage on display. Godzilla is known and feared by many, but his commercialisation for the public that he haunts has overwhelmed the fear first held. He and his kaiju friends are treated as natural disasters, not terrifying beings that they once were, they are a fact of life, and something that can be profited from. Okawara displays this well, a theme that underlines much of the build-up, as governments and scientists let their guard down, a new form of Godzilla comes through, with an adversary like no other.

Key to this change in tone is the design of Godzilla. A real menace for the screen, slowly imploding from all those years of radiation poisoning. Destoroyah is an interesting enemy, too, the design on those initially crawling creatures is phenomenal. Reminiscent of Saturday morning cartoons, their obvious plastic style is an endearing piece that adds a nice layer of kitschy, reality-bending brilliance. Endearing and ghastly all at once, an odd middle ground is found, and Okawara sticks to it with all the strength of a strong adhesive. He has found the key to unlocking the fun of the franchise, and dares not let go. More power to him, it would’ve saved some of the earlier films in the series.

How far technology has come, especially since the days of those Ishirō Honda classics. Explosive, grand destruction leads to some thoroughly enjoyable moments. Noting that its strengths lie in bombastic moments of demolition, Godzilla vs. Destoroyah plays into its obvious brawn well, with a mastering of special effects and monsters that look, sound and, crucially, feel dangerous to the protagonists that wish to fend off the inevitable blasts and bombs Godzilla and other foes shall deliver. With its narrative a grand continuation of a story that spanned forty years, Okawara presides over a strong, latter-day imagining of the King of Kaiju. Strong work all round, with interesting performances from the human characters, their crucial angles of interest allow for a strong foundation of great monster design and even better moments of manic terror.