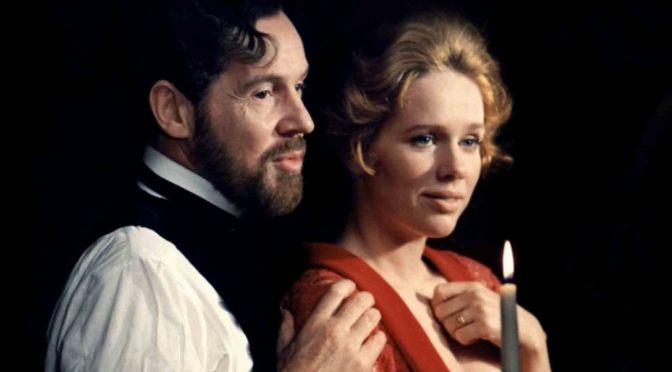 Suffering away as he always does, Ingmar Bergman’s craft within Cries and Whispers offers audiences exactly what they expect and desire from the ineffable work of the Swedish-born director. Throwing us deep into the pangs of misery and strife as only he can, Bergman offers a stalwart attempt at analysing grief and pain, and how we deal with those themes as they come crashing down around us. Our response to the events that unfold within this early 70s piece may be colossally different, but the hard-working cast and feverishly talented crew piece together an intensely poetic and enjoyable film.

Immediately opening to cries of pain and unremitting silences, Cries and Whispers sticks true to its title. Thrusting us right into the harrowing and despondent circumstances, a family who cannot care for one another is presented with unflinching horror. Engaging with these individuals is possible, their personal throes and afflictions taking centre stage at a time where they should rally around their dying sister, Agnes (Harriet Andersson). The support needed in a time of such ailment is not granted, instead, the supporting performers spend much of their time agonizing over the problems of their own lives. Taking their troubles to the centre of the stage more often than they should, Bergman carves out a poignant message of family ties and the selfish, self-centred nature we may accidentally fall into.

These themes are strong, stronger still are the performances found throughout. Erland Josephson and his chemistry with Liv Ullmann is strong, a nice precursor to their later collaboration with Bergman in the defining brilliance of Scenes from a Marriage. Cries and Whispers’ key idea, though, is that the most prominent and plagued character falls to the wayside. The lack of real and thorough love from those around her is more painful for her than the physical ailments that strike her down and leave her in a state of manic pandemonium. An array of emotions on display all at once, Andersson represents the bubbling terror of feeling isolated and scared, even when surrounded by supposed loved ones and concerned practitioners.

Miserable and poetic as ever, Bergman’s resolute message rings throughout Cries and Whispers as poignantly as you’d expect. Love, lust and passion resonate well here, the common themes of Bergman are tuned to match a strong level of craftsmanship. The silence filled only by the ticking of a clock and a few muttered words, Cries and Whispers relies on its titular reactions. The overwhelming use of the colour red will lead to symbolic gestures and moments of real, stifled meaning, but nothing is stronger than the movement of these characters, who lack the generosity so needed of them in such a bleak pocket of time.