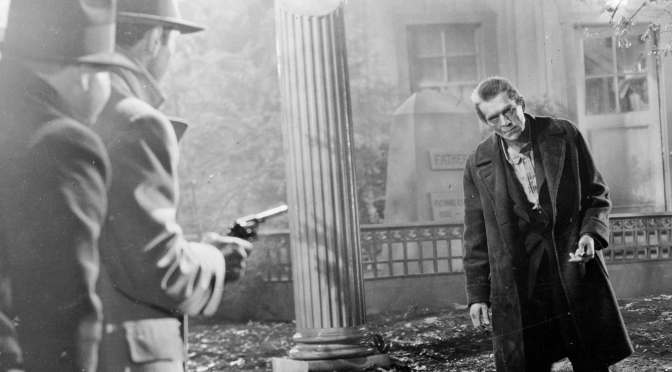 Boris Karloff must have loved his time as Frankenstein’s Monster. His appearance in The Walking Dead shows him as yet another lurching monster brought back from the dead. John Ellman is wrongly executed, and brought back to life through the experimental and haunted work of Dr. Evan Beaumont (Edmund Gwenn). As the frequency of filmmaking grew and grew throughout this decade, tropes were becoming clearer. The first slivers of consistent box office draws were found, and the blend of horrifying science-fiction seems to be one that had worked for many. Why it hadn’t worked as well for The Walking Dead at the time is a branching series of issues that are inexplicable in isolation, but understandable when paired with other, generalised cliché.

The brief flashes of story don’t bring about anything wholly compelling. The Walking Dead struggles with its pacing, despite such a short running time. Short, snappy dialogue is a necessity here, but Karloff’s leading performance is sluggish and ponders vaguely interesting writing for far too long a time. There’s simply no need to do so, and what brief offerings of character design shine through are ended abruptly. Director Michael Curtiz, for all his talents behind the camera, doesn’t quite understand how constricted he is. A bold move indeed to try and make a film this grand in such a short span of time, but even the greatest of artists would struggle to pull anything substantial from The Walking Dead.

Curtiz does at least bring some nice direction to the table, early innovation from a man who would go on to direct some of the all-time greats of cinema. As a product, The Walking Dead may falter under its writing restrictions, but at least it serves as a piece of artistic merit and variety. A little variety here or there, nice framing that was typical to this era of filmmaking, and resolute confidence behind the camera. The dead man that lingers around these many scenes, clutching to what little life is left in that brain of his. Operating on a basic level of competency, there are spluttered moments that show inevitable inspiration for the zombified creatures that would lead the 50s and 60s charge, but not enough to make for an interesting project on its own. Not in these early days, anyway.

This mid-30s piece from Casablanca mastermind Michael Curtiz is acceptable enough as a vaguely inspired bit of film. Its influences are obvious and the attempts at cultivating a rich story are admirable, but the running time simply doesn’t allow it. A sad shame, considering the magnificent talent on offer, but there are more than a handful of well-rounded moments. Rattling through its story with such feverish intensity, not because it wants to do so, but because it has no choice, The Walking Dead is short enough to warrant watching, a short bit of horror that thrives under Karloff’s command of the camera. Expecting more than amicably short, though, is to expect far too much of Curtiz’s work.