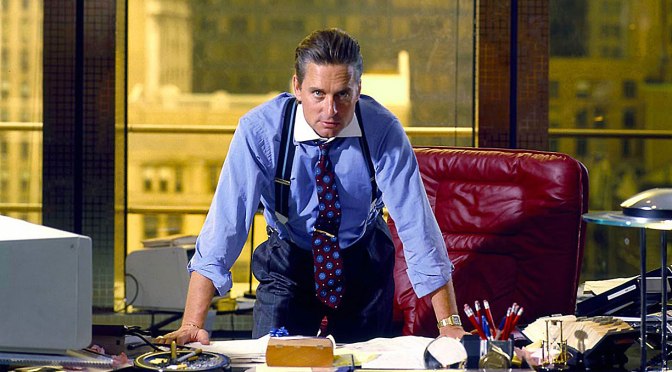 With ego-centric shoulders bustling through the drab offices of New York, there, festering at the core of it all, is a goldmine for filmmaking. It should not be surprising that, especially in recent years, there are more than a handful of films set within these harsh, stinking stock rooms. Wall Street, from the mind of Oliver Stone, indicates a change of pace from the usual attempts Hollywood have made, cracking through the moral lessons and presenting a voice and set of characters who are bloodthirsty and conniving until the bitter end. Are there better representations of Wall Street than Wall Street? Yes. Jungle 2 Jungle and The Wolf of Wall Street show the embittered corruption, but Stone is the first to showcase how a corruption of power does not always lead to consequences.

His collation of strong cast members makes this abundantly clear. With Michael Douglas and Charlie Sheen at the helm, audience members are in for an undeniably crisp and clear treat. Two stalwart performers adapting and acting to the best of their abilities in each of their respective high points. The two share good chemistry and interesting scenes with one another, but never amount to anything more than a professional and rather cold display of hard work. Nothing beyond that is showcased, a sad shame considering how tirelessly they’re both working to make this script feel deeper than it is. What few scenes shine through here are exemplary, though, and show the detail of their work rather succinctly.

Stone commands these scenes well, but the quality is never sudden enough to envision anything larger than a handful of interesting moments. It has all the hallmarks of an 80s movie, but also the misgivings and shortcomings that come alongside it. For every poignant or entertaining moment, there are three plodding, grating moments that slow the pace to a crawl and derail any form or semblance of engaged conversation. How we get to the leading message is not particularly important to Stone, he is too focused on the impact of such scathing and enlightened criticism. He has crossed the finish line, made it to the end of his path, but fails to bring anyone along for the ride.

Wall Street is good, but it never comes together quite as well as it should. All of its strongest components are isolated from one another. Terence Stamp is used fleetingly and in quick doses, rather than the brooding, overarching character he could have been had the writing been up to the challenge. There is no doubt that Stone can craft engaging films with interesting messages, and the subtext of Wall Street far exceeds the merits found elsewhere. Amoral, but realistic in its presentation and prose, the film offers a message that will win it no favours or favourites, but one that is at the core of many for those who scatter themselves across Wall Street.