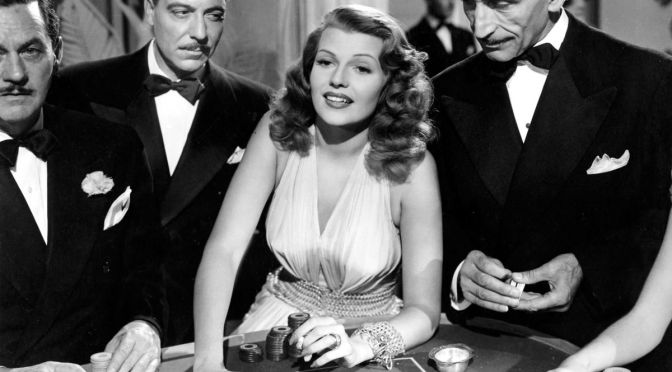 A gambling man cheating his way to a victory, Gilda opens with a troubled and flawed leading man. The Charles Vidor piece offers up a chance encounter, a run-in with a titular character who seems dastardlier than she first appears. Performed and crafted under competent hands, an amalgamation of the thriller and romance genre doesn’t seem too far a reach. But for the time of its release, this crossover provided new ground for everyone involved. Glenn Ford and George Macready open this story, a man bailed out of a near-fatal encounter, thrust into a world of unknown optimism and lurking madness hiding in every corner. A recipe fit for perfection, but a stark downturn and an inability to grapple with the more poignant moments is to the detriment of Gilda.

Leaving a lasting impression is one such failing of Gilda, a film that will coast along on the fleeting lines of memorable dialogue that have stained themselves into the minds of historians and film buffs for generations. There is no changing that inevitability, but it is interesting to note that, after all these years, Gilda has survived on a few pockets of interest. Those twists and turns that seemed so fresh decades ago have thrived in the wake of contemporary cinema. Accomplishing such feats first does not necessarily make it the best for such tropes. Engaging with ideas that are widely popular now before it was the mainstream do make Gilda a pioneer of the genre, that is undeniable. What is up for debate, however, is its contemporary impact.

Granting leeway with the restrictions of the time is no argument to make, especially considering the quality that preceded Vidor’s work. Performers that do what they are asked of, but do not stretch beyond amicable and acceptable, direction that presents artistic merits, but leaves out the crucial aspects of engaging scenes. There is no bite, no hook for us to involve ourselves with. Gilda suffers from becoming a one-trick pony rather immediately, relying on the stalwart efforts of Rita Hayworth. Her eponymous performance is worthy of watching, perhaps just to see the impact of the femme fatale and how it grew into the Hollywood draw of the modern century. Beyond that, though, the film doesn’t offer up much of interest. It is a product of the times, but in this instance that merely means it showcases a number of elderly tropes, many of which have little focus or ambition.

Gilda represents a quasi-form of aristocracy, a milieu of achievements and shortcomings for Farrell to bask in and experience. Its title character the catalyst for a movement of messages and themes that linger throughout, but don’t amount to much more than fleeting pockets of interest. A piece that benefits from its real-world timing, the post-war woes felt in such tremendous yet fleeting pockets. Gilda doesn’t perform all that well on the whole, an unfortunate case of its emotions feeling rather cold. An obvious pang of irony soon follows on from that, the romance at the heart of it all wilting in favour of a shot composition and style that offers sleek, efficient design, but no room for love or heartfelt originality.