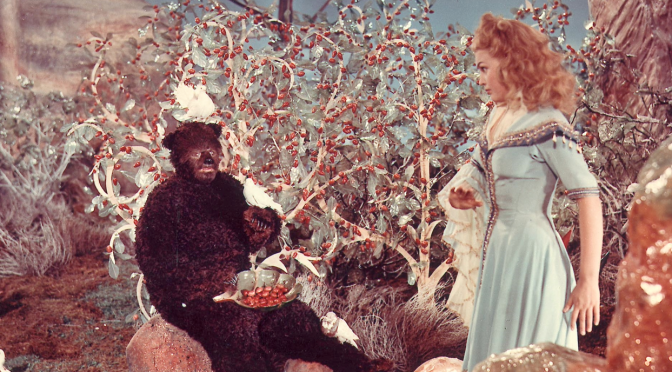 The field and fake sun that open this jaunt through The Singing Ringing Tree would be agony for consistency if the implementation and result were not so fantastic. A quick switch from day to night switches the lights out and the credits on for this Francesco Stefani feature. The only one of his career, and it comes as an adaptation of a Brothers Grimm fairy tale. Which one, it is not quite sure. The Singing Ringing Tree is an excellent bastardisation of so many dreamlike stories. It has charming princes; the iconography of the medieval era beats right at the heart of this Stefani feature. None of it makes sense, yet it is an impressive scale and scope from the one-time feature director.

Technical merits can only mask so much of a boring experience though, and while The Singing Ringing Tree certainly isn’t a boring feature, it does feel worryingly close to mediocrity at times. For a first outing, Stefani can be given the benefit of the doubt. Brave princes and heroic encounters are all set to an upbeat soundtrack and some colourful surroundings. Eckart Dux as the stereotypically charming, coiffed-haired Prince is a grand enough design that works for this feature but adds little to the fabric of the world Stefani tries so desperately to create. Thankfully it is not a lost cause, but much of The Singing Ringing Tree is trying to play catch-up with the magic of American features that had been released a decade before it.

It could even be argued that the pinnacle of the fairy tale fad in cinema was starting to fade around this point, but European cinema was experiencing its boom. This is no Ingmar Bergman feature, but to have The Singing Ringing Tree and The Seventh Seal released in the same year does speak somewhat of the quality and trust put into directors from Western Europe. Bergman may have crafted an artistic benchmark, but Stefani crafts a simple and jagged family-friendly offering. Miniatures serve as landscape shots and look rather delightful. A lot of the costume design and equipment available to Stefani is thoroughly impressive as he lines the hallways of kingdoms with regal princes and typical paupers, but the performances leave much to be desired.

Word of advice, avoid the dub at all costs. A dreadful experience, go through it again with the subtitles on if you made that mistake the first time around. Even then, so much of what makes The Singing Ringing Tree interesting is the technical aspects. Its utilisation of colour in a decade that was still adapting to it is a gifted and striking offering that does not have the props or dynamism to utilise it beyond smart and short moments. Still, it takes a turn when a man dressed as what might be a bear vaults the palace walls and clatters ceramic plates everywhere. A strange feature, nobody can deny that, but technical merits do not amount to brilliance, they amount to pouty princesses and nothing much else.