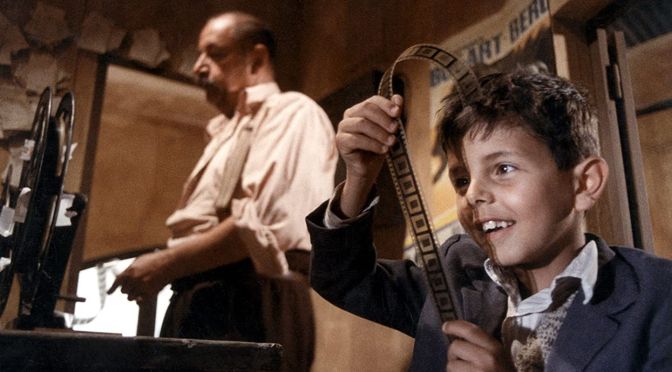 Cinema as the backdrop to love could mean just about anything for Cinema Paradiso. Whether it is an infatuation with the silver screen or something beyond that in the real world. The act of journeying to the cinema has been lauded and praised time and time again. Giuseppe Tornatore is one of the few to both capture the magic of the cinema, while also convincing some that the journey there and back isn’t worth it. Those that don’t find beauty in the halls that lead towards the double doors of the massive screening rooms may find inspiration there instead. Whether that is an inspiration to up sticks and leave town or to pursue a career as a filmmaker. Both occur to Salvatore Di Vita, a filmmaker who returns home upon learning of the death of Alfredo (Philippe Noiret), the projectionist from the eponymous cinema.

What marks Cinema Paradiso as so unique is its ability to tackle the grand edification of a young boy realising there is more to the world than home living. Never give in to the nostalgia of a visit home. That idea becomes an edifice for Salvatore, torn by a desire to pay his respects and go against the will of a man that shaped his life. Noiret’s performance is incredibly touching. He and Marco Leonardi have incredible scenes with one another. Those early days of friendship and bonding come to Cinema Paradiso with intense variety and love not just for films but those that love to view them. Tornatore is careful not to overdose on this sentimentality, and layers the film with an earnest conversation, goals for each character and a beautiful backdrop for it all to take place.

There is more to Cinema Paradiso than the loving relationship between two passionate cinema fans, though. Censorship plays a big part in Cinema Paradiso, as do the intricacies of the sudden realisations that come from watching films. Nobody can read the opening crawl, outrage from the audience toward the screen joins the crowd in unison against a common love for film. It is the extent of passion that Tornatore explores best of all. These are fans of the cinema, but few are going to pursue it as anything more than a distraction from the humdrum lifestyle that surrounds them and their families.

For all its emotive integrity and fantastic disposition to the world of film, Cinema Paradiso is wrong. The cinema is not a place where dreams are made. Films can be contained in various formats, and the love letter to the act of going to the cinema is folly, especially from a British perspective. A place where seats are sticky and the act of settling in and engaging with a new piece of film is so horribly commercialised that it would be easier to wait it out and watch at home. There is no love for the places that house the latest releases because they often don’t show the films that truly matter. Those that do are too far away. Cinema Paradiso echoes the glory days out as best it can, but audiences are far away from that now and will likely never return.