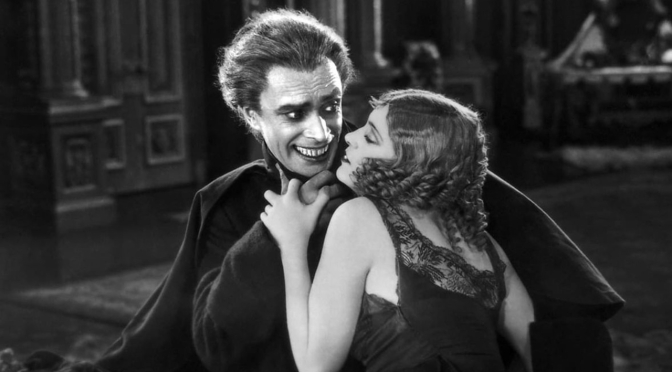 While the true torture behind The Man Who Laughs is in what it means for the character, much of it relies on the visual chills that director Paul Leni coaxes out of that scarred face. What a truly horrid time it must be to find yourself smiling forever. One of the most agonizingly brilliant aspects of that is through Conrad Veidt’s performance, he is that titular man who does, indeed, laugh. That is all he can do, although through his eyes and the strained look on his face, we get a sense that there is, absolutely, something deeper and darker to Gwynplaine (Veidt).

Its horrors beyond the face of its strained and struggling leading character are, unfortunately, rather forgettable. The Man Who Laughs may have a gothic presence to it and a remarkable eye for set design, but its wavering attitude toward the horrors of living are unremarkable. They do not linger on the mind for all that long, instead, they hope to include and induce some meritable, deeper understanding of horror and how it affects the protagonist. Nowhere is that greater, or more frequently presented by Leni than in what Gwynplaine represents. Deep within is a sudden and often obvious allegorical system.

The mask Gwynplaine is forced to wear brings out the real unnerving situation found within The Man Who Laughs. Where or why this has happened is inconsequential, but Leni does manage to coax a layer of intrigue out of his characters. Mostly, through the reactions of those surrounding Gwynplaine, the horror they hold them in. It is a beauty and beast style story, but there is a truly happy ending just waiting to burst out. Its melodramatics make this an inevitability, rather than a notion of hope for the leading pair. Considering the supporting cast and gothic intentions surrounding Gwynplaine and Dea (Mary Philbin), it feels like an inevitable disappointment. Do we want happiness for the man who always smiles? Surely so, but it is whether or not it makes sense for this to happen. If it does, then Leni never quite states it and hopes that some lingering emotional attachment will aid him here.

It is a fine film, one whose tragedy is interlaced with its horrors. Those notes of melodrama are a tad too potent, though, wherein the necessary desires and movements of the characters are overplayed. The Man Who Laughs inspired and aided genres and characters beyond the realm of film, but its gothic horrors are weaker than anticipated. Their visuals are exceptional, a real championing of this style is found within, but nothing of particular spark, flare or style is offered up beyond that. We must be wary of those that have inspired, for the inspiration they present often leads to superior projects down the line. We might associate a permanent, manic smile with that of Joker from Batman, but knowing The Man Who Laughs inspired that look isn’t just obvious, but oddly intriguing, despite the lack of tragedy or fire in Veidt’s performance.